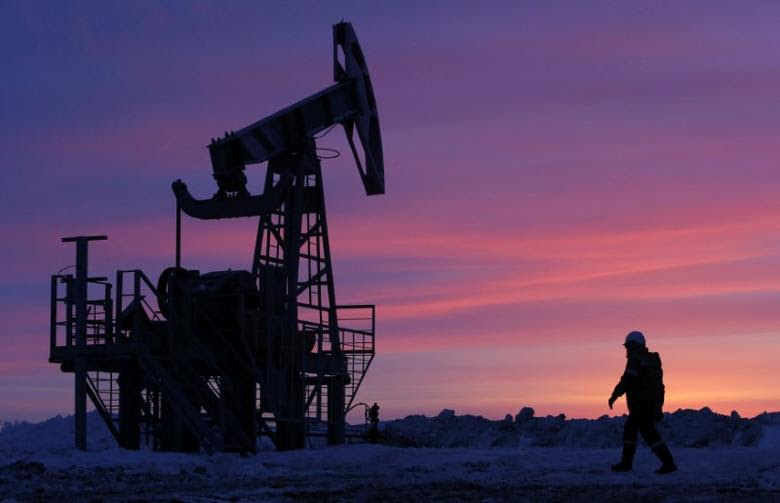 A worker walks past a pump jack on an oil field owned by the Bashneft company near Nikolo-Berezovka, Bashkortostan, Russia , January 28, 2015. REUTERS/Sergei Karpukhin/File Photo

Oil prices steadied on Tuesday as lower production by Russia and major OPEC exporters balanced news of higher output in the United States, Canada and Libya.Benchmark Brent crude oil LCOc1 was down 10 cents at $51.42 a barrel by 1345 GMT. The futures contract hit a one-month low of $50.45 last week after the restart of two Libyan oilfields. U.S. light crude CLc1 was 20 cents lower at $48.64.

The Organization of the Petroleum Exporting Countries and other producers including Russia have agreed to cut output by 1.8 million barrels per day (bpd) for the first half of 2017 to try to reduce a global glut.

OPEC and other producers plan to meet on May 25 and are widely expected to keep output limits for the rest of the year.

"If the OPEC cuts get rolled into the second half of the year, that will underpin oil prices," Gilvary said. "We are managing things around $50-$55 a barrel. That's probably the range we would expect for the rest of the year."

But oil market sentiment is fragile.

Libya's National Oil Company said on Monday production had risen above 760,000 bpd to its highest since December 2014, with plans to keep boosting production.
U.S. crude output C-OUT-T-EIA is at its highest since August 2015, while the Syncrude Canada oil sands project has started shipping crude from its Mildred Lake upgrader again after cutting production due to a fire in March.

U.S. crude inventories are expected to mark a fourth straight week of declines from a record high hit at the end of March, but stocks are still seen about 10 percent above year-end levels, according to Reuters calculations.

(Additional reporting by Osamu Tsukimori in Tokyo; editing by Jason Neely and Louise Heavens)
Posted by Crude Oil Daily at 10:31 AM