US tight oil producers get lifeline in OPEC deal, but remain cautious 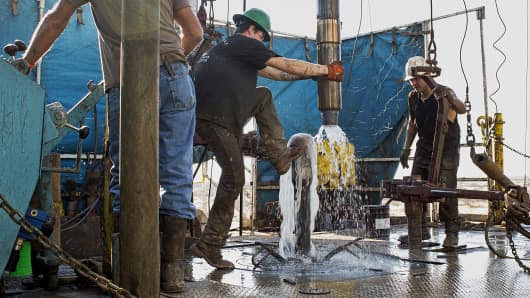 http://www.platts.com/latest-news/oil/washington/us-tight-oil-producers-get-lifeline-in-opec-deal-21224134
US tight oil producers in struggling basins like the Bakken and Eagle Ford got a lifeline from OPEC's agreement to cut production, with analysts expecting their declines to start moderating if oil holds at $50/b while output would rebound at $60/b.

The Permian is expected to keep leading US production even if the OPEC deal falls apart and prices take another downturn, analysts said Thursday.

Any recovery in US offshore production remains years away, but an analyst said the OPEC cuts could accelerate that activity by a year.

Related: Listen to a special episode of Capitol Crude on OPEC's historic decision to cut production

Despite the optimism for recoveries in the Bakken and Eagle Ford, US producers will likely remain cautious well into next year while watching crude prices and the massive storage glut before moving rigs back into place, analysts said.

"The OPEC deal puts a fairly strong floor in $40s instead of leaving a trap door in the $30s without a deal," said Fred Lawrence, vice president for economics for the Independent Petroleum Association of America.

"It will be interesting to see how the first half goes, but my guess is there's still going to be capital discipline and companies are going to be continuing to set themselves up for what most of them believe are stronger prices going into 2018," Lawrence said.

Stephens analyst Matt Marietta urged clients to "avoid sharp recovery hype" surrounding US production because the oil market has a long way to go in rebalancing supply and demand. Even with a 1 million b/d supply cut, it will take 1.5 years for OECD inventory levels to stabilize, he said.

"Even though the price action is positive, the physical market just can't absorb much production growth as it exists today until you begin drawing down the inventories," he said.

That said, Marietta does see US shale production on the road to stabilizing if oil stays around $50/b. He said the Permian would continue to offset declines elsewhere, and Eagle Ford and Bakken declines would start moderating.

Garrett Golding, vice president of The Rapidan Group, expects US onshore production to remain flat in 2017 if oil prices stay around $50/b. Permian output could increase even if prices take another downturn, but Bakken and Eagle Ford producers need $60/b to turn positive next year, he said.

"We do not see much further acceleration in Permian growth in 2017 if prices remain relatively elevated," Golding said. "More capital could flow to the Eagle Ford, Bakken, and SCOOP/STACK in that scenario."

Wood Mackenzie said prices would have to stay above $55/b for several months to increase US tight oil activity.

"This would spread drilling increases across the main Lower-48 plays, meaning tight oil becomes more than just a Permian story," Ann-Louise Hittle, vice president for research, said in a note to clients.

BP's announcement Thursday that it was going forward with its long-delayed $9 billion Mad Dog Phase 2 project in the Gulf of Mexico seemed to put US offshore development back on the table (See story, 1605 GMT), although analysts saw no connection between the decision and the OPEC cuts.

Stephens' Marietta said the OPEC deal's potential to accelerate a rebalancing of supply and demand could bring offshore plans forward by a year, from previous expectations of a 2019-20 restart to activity.

"A real simplistic way that I've thought about this OPEC cut is: annual demand is expected to increase about 1.2 million-1.5 million b/d," he said. "So having OPEC take effectively a year of demand growth worth of supply off the market, it almost brings everything forward by a year and that would include the potential for the offshore to show a recovery."

IPAA's Lawrence said OPEC will be watching whether US producers adjust capex and rig activity early next year before deciding whether to continue the cuts at their May meeting.

OPEC agreed in Vienna Wednesday to cut 1.2 million b/d from January to 32.5 million b/d, along with a target of obtaining 600,000 b/d in cuts from non-OPEC producers.