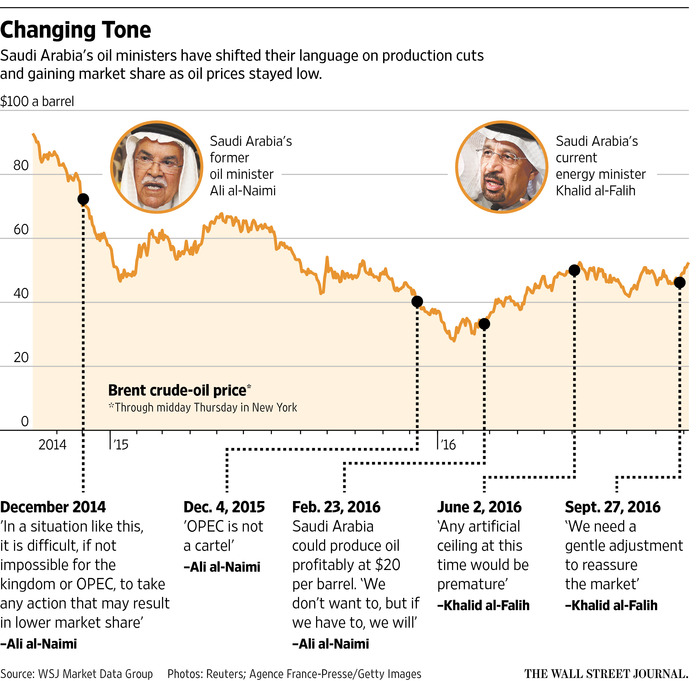 Saudi Arabia’s deputy crown prince sent his energy minister to an OPEC meeting last month with a difficult mission: Make a deal with rival Iran but don’t compromise the kingdom’s ability to fight for oil-market share, people familiar with the matter said.

The directive was a departure for Deputy Crown Prince Mohammed bin Salman, the powerful 31-year-old son of King Salman who is prosecuting Saudi Arabia’s war in Yemen against Iran-backed rebels. Prince Mohammed scuttled previous attempts at oil-production deals with the Organization of the Petroleum Exporting Countries this year as Saudi Arabia worried about Iran’s rising output following the end of Western sanctions.

The agreement struck in Algiers last week would slash 1% to 2% of the 14-nation cartel’s 33.2 million barrels a day of production, the first time OPEC has agreed to limit output in eight years. Oil prices have surged, with U.S. crude prices breaking $50 a barrel on Thursday for the first time since late June, up over 13% since the Sept. 28 OPEC deal.

Oil prices have also been boosted in recent days by significant drawdowns of stored oil in the U.S.

The U.S. Energy Information Administration on Wednesday said U.S. crude inventories declined by 3 million barrels in the week ended Sept. 30, falling for the fifth straight week. It was another sign that demand is catching up with the oversupply of crude that caused prices to collapse in 2014.

But the OPEC deal took oil-market observers by surprise after two years of indecision from the cartel. Analysts said it raised the question of whether Saudi Arabia was reversing its policy of fighting for market share in the era of low crude prices.

According to the people familiar with the matter, Prince Mohammed didn’t authorize a sea change in Saudi Arabia’s market-share strategy. While Saudi Arabia will take on the bulk of OPEC’s proposed cuts, slashing up to 400,000 barrels a day by the end of the year, the kingdom was planning to make those cuts anyway, the people said.

Saudi energy minister Khalid al-Falih could only offer to bring the kingdom down from record highs this summer to more sustainable levels that were pumped in the spring, the people said.

Meanwhile, Iran agreed to a still-undefined cap on its production for the first time. Other OPEC members agreed to cut as well, in amounts still to be determined.

amounts still to be determined.

The OPEC deal “is not really a change in the Saudi oil strategy or a big compromise on the Saudis’ part,” said a Saudi oil-industry official. “The kingdom would still be able to meet all of its customers’ demand comfortably at these levels and without losing market share.”

On Wednesday, for instance, Saudi Arabia cut the prices it charges for oil in key markets in Asia and Europe, intensifying its market-share rivalry with Iran, Iraq, Angola and other OPEC members. Saudi price cuts are generally matched or beaten by those countries to stay competitive.

Oil traders are now watching whether non-OPEC members such as Russia join the production cuts. Russia, which produces more crude oil than any other country, is meeting with Saudi Arabia and other OPEC members next week at a conference in Istanbul to discuss potential cuts.

Prince Mohammed is second in line to the throne in Saudi Arabia and has been given an expansive policy portfolio, including economics and defense. He has been entrusted by his father to oversee several jarring changes to reform the economy and reduce its reliance on oil. The prince also heads Saudi Arabian Oil Co.’s Supreme Council, the top decision-making body for the world’s largest oil company, and has been heavily involved in oil policy decisions in the past year.

The prince stopped Saudi Arabia from making a deal on oil production with Russia and other OPEC members in Qatar in April.

People with knowledge of Saudi strategy-making have said the kingdom was pushed into action after more than two years of slumping oil prices began imposing economic pain on ordinary Saudi citizens who had grown accustomed to a subsidized lifestyle. Saudi Arabia also needed money to continue pressing its war on its southern border with Yemen.


Welcome to the Wall Street Journal’s Daily Shot — a new way to “speed read” markets and economics through charts. The Daily Shot is now a staple of the Journal’s market coverage, and starting Nov. 1, Journal subscribers will be able to receive in their email boxes before each trading day.

Prince Mohammed met Russian President Vladimir Putin at the G-20 summit in China in early September. After the meeting, the Saudi and Russian energy ministers announced a pact to stabilize the market.

Mr. Falih wanted to make OPEC relevant again and feared the cartel could collapse without at least a show of action this year, people familiar with the matter said. He met with Prince Mohammed to consult about the meeting in Algiers, the people said.

“Falih was given the green light to make this happen by Mohammed bin Salman,” said a person familiar with the matter. They “really wanted a deal or at least the framework of a deal.”

The deal struck in Algiers could still fall apart. OPEC has a long history of agreeing to production cuts, only to have the pact collapse when countries change their minds. Iran is trying to increase production, not reduce it, and so are OPEC members Nigeria and Libya, where security problems have cut off output.

The rise in oil prices could help American shale producers, who could in turn help sink oil prices with new output. A U.S.-based oil boom caused the oil-price crash, and the flood of new crude helped shape the so-called Saudi market-share strategy. Saudi output cuts would only help American producers, Saudi officials have said, so the kingdom would pump up its own output and compete at low prices.

Robin Mills, chief executive at Qamar Energy, a Dubai consulting firm, said Saudi Arabia appeared to be just tweaking its strategy, aiming it less at the U.S. and more at OPEC competitors such as Iran.