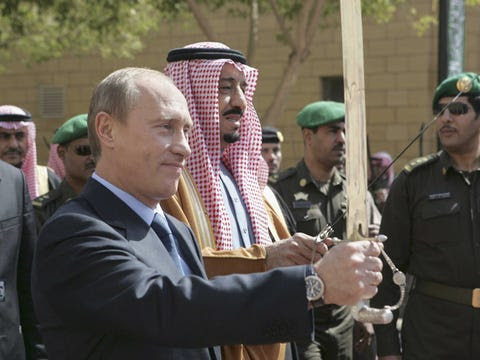 
Russia is open for talks with other major oil producers on freezing output as the market is unlikely to balance until next year, Energy Minister Alexander Novak said in an interview with Asharq Al-Awsat.

The country is committed to continuing dialogue to stabilize the market, Novak said, according to the Saudi-owned newspaper.

The minister’s comments follow a rebound in oil last week on speculation that informal OPEC talks in September may result in measures to prop up prices. While several members of the Organization of Petroleum Exporting Countries have called for a brake on production, an earlier round of discussions collapsed when Saudi Arabia refused to sign a deal without the participation of rival Iran.

Those talks, in April, showed that producers can at least work together, Novak said, according to Asharq Al-Awsat. Russia is open to “joint measures” since the current cycle of low crude prices is unlikely to end until late 2017, he said.

For an analysis of the obstacles to an oil-freeze accord, click here.

West Texas Intermediate crude climbed 6.4 percent last week, its biggest weekly advance since April, helping to pare declines the past two months. Futures traded up 0.5 percent at $44.70 a barrel as of 12:16 p.m. London time on Monday.

The proposed Algiers talks will take place during the ministerial meeting of the International Energy Forum, which Saudi Arabia and Russia both plan to attend. Proponents of a freeze may face push-back from several OPEC members that are pumping below capacity.

Commerzbank AG was also skeptical a broad agreement will be possible. Russia’s expression of willingness to engage in talks “is likely to prove little more than lip service, as so often in the past,” the bank said in a report.
Posted by Crude Oil Daily at 12:48 PM