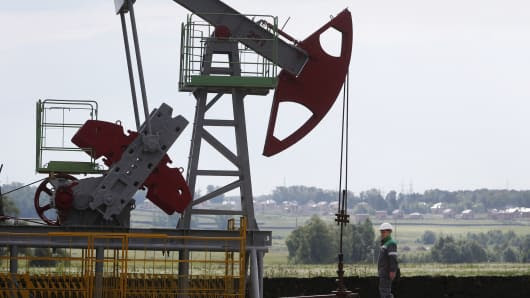 http://www.cnbc.com/2016/05/17/canadian-wildfires-nigerian-oil-disruptions-speeding-up-new-world-energy-order.html
The world's oil market is rebalancing faster than expected due to several serious outages, but for now there is enough oil in storage and excess capacity to keep prices from spiking.

"We've strung together an impressive number of outages and supply disruptions for the moment, but there's every incentive in the dire straits the industry's been in to get these barrels on line," said John Kilduff, partner with Again Capital.

Outages and supply disruptions in Canada, Nigeria, Venezuela, and other producing regions have reduced oil production by an estimated 3.8 million barrels a day. Some of those outages should be temporary, and could bring a wall of oil back to the market once they are resolved. There is also the potential for more production from Saudi Arabia, Iran and even the U.S. - if prices rise enough to enable America's shale producers to restart some drilling.

"Some of it's temporary, and if it goes on long enough, there will be longer lasting implications," said Michael Cohen, head of energy commodities research at Barclays. In Canada, an estimated 1.2 million barrels a day are offline due to forest fires in Alberta. The uncontrolled fire, covering 704,000 acres, moved toward energy production facilities Tuesday, after jumping a fire break area, according to Reuters.

Suncor shut down its base plant, and said it had not sustained any damage, while Enbridge's Cheecham crude tank farm was less than a mile away from fire but fire fighters had the fire under control, according to Reuters.

"This is bad," said Cohen, adding it's the biggest disruption in North America since Hurricane Ike in 2008. "It looks like it's getting worse before it gets any better...It's hard to say. Is it two weeks? Is it four weeks? If it goes on for another two weeks we're going to have some medium term implications for some of the projects up there."

The industry had been hopeful the fires would be out and they would start sending workers back to their jobs just several days ago. "We had this big U-turn in events over the past 48 hours," said Jackie Forrest, vice president energy research at Arc Financial Corp. "It's getting difficult to predict when this wild fire will be put out." She said the fact it has moved north means it will take longer for the industry to restart oil sands production, now down by about 50 percent.
The Canadian situation is different from other outages in that it is seen as a short-term problem, due to an act of nature, and while uncertain, the situations in Nigeria or Venezuela could be harder to predict.
In Nigeria, militants have knocked oil production offline as the country struggles with the impact of lower oil prices on its economy.

"If Nigeria goes offline, it's sticky. These armed militants are very intent on shutting down production. They have the capacity to do so," said Helima Croft, head of commodities research at RBC Capital Markets.

Venezuela is another trouble spot, politically and economically. It is producing about 2.3 million barrels a day, but analysts see it as in a state of decline.

Is Saudi Arabia calling the market's bluff over oil?
"Things are falling apart. People aren't getting paid. Equipment is not being brought in, and that's precipitating production declines," said Eric Lee, an energy analyst at Citigroup. He said the situation could lead to failures in infrastructure, such as ports, pipelines and refineries. Venezuelan officials this week said they were able to secure a better loan-for-oil deal from China, buying time on debt payments.

"When prices are low, you strip out the oil revenue and things start to gum up," said Cohen. "You've got people upset in Nigeria, Iraq and Libya, and part of it is they're not getting paid off…You've got Kirkuk oil field off line and you have a government in Iraq that is in a serious state of disarray."

But Cohen said oil could return to the market from disruptions and that could send prices lower again. Brent crude was trading just under $50 Tuesday evening, and West Texas Intermediate was at about $48.50, up about 11 percent in the past week.

On the other side of the equation, there are also major producers that could add supply.

One of those is Libya, and news of a deal that could lead to the resumption of some production put pressure on oil prices Tuesday.

Oil prices don’t have much more room to run: Nasdaq energy chief
"I look at Libya and I'm still a pessimist for now. This is plan "B" for ISIS," she said. The presence of ISIS near the oil facilities is a threat. "They're not going to try to operate it. They're trying to make it inoperable."

Besides Libya's expected increase in production, Iran has been returning oil to the market more quickly than expected.

Saudi Arabia has said it could add another million barrels to the market this year, and analysts are watching to see if it will do that. Saudi Arabia has made clear it is ready to ramp up production to meet customer demand but it changed the dynamic of the market when it pushed OPEC to move to let the market set pricing instead of adjusting output. That strategy led to a collapse in oil prices that took WTI to $26 per barrel. Oil has since been recovering from that low, and has received an extra lift from the outages.

"The political change in Saudi Arabia is going to change not only Saudi Arabia but the oil market," said Daniel Yergin, vice chairman of IHS. "In terms of achieving their objectives, they want to enhance their position of being the low cost supplier."

Yergin said it's striking that the oil disruptions have had such little impact. "You still have a big overhang of inventories, but after 18 months, the market is turning and it was time for a turn," he said. "Supply and demand in the second half is pointing to around $50 a barrel. But that's barring any major disruption. If we see further disruption that could put more upward pressure on prices."

Yergin said U.S. shale producers could start to resume some drilling activity and that could add barrels to the market. "Certainly at $50 that's the number that starts to stabilize U.S. shale. I think people come back and start putting on more drilling rigs. People, at $50, will be a lot more efficient than they were before," he said.