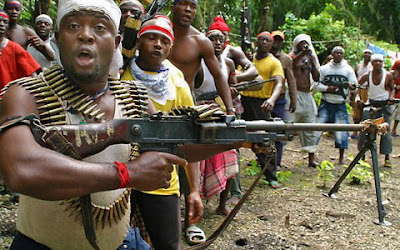 Government troops engaged militants belonging to the self-styled Niger Delta Avengers in a fierce gun battle on Sunday near an oil pipeline operated by Italy-based Eni, with several of the militants killed, according to Army spokesman Sani Usman.

Local media Tuesday reported the deployment of jet fighters and gunboats by the military in the creeks of the Niger Delta in the continued hunt for militants.

"To the international oil companies and indigenous oil companies, it's going to be bloody this time around. Your facilities and personnel will bear the brunt of our fury," the group said in a tweet from their usual Twitter account.

The group claimed responsibility for last Saturday's attacks on the Nembe 1, 2 and 3 Brass to Bonny trunk line belonging to Eni and indigenous company Aiteo. It came barely 24 hours after the bombing of state-owned Nigerian National Petroleum Corp. crude and gas pipeline in the western division of the Niger Delta.

Industry officials said was a well scripted plan by the self styled Niger Delta Avengers group to completely shut down oil production in Nigeria, already down to 1.1 million b/d, according to official statistics.

Renewed militancy in the Niger Delta which resurfaced after years of relative calm, has caused Nigeria's crude oil and condensate production to drop by almost 50% since the start of the year.

Most of the production cuts came from outages at facilities attacked by the militants in the western division of the Niger Delta.

The sharp drop in oil production has severely hurt Nigeria's economy, already reeling from the slump in global oil prices.

President Muhammadu Buhari, in a nationwide broadcast on Sunday said while his government would continue to engage leaders in the Niger Delta with a view to addressing the problems there, including reviving the government's amnesty program for repentant militants, the president however, vowed to clamp down on the militants attacking oil installations.

"If the militants and [pipeline] vandals are testing our resolve, they are much mistaken. We shall apprehend the perpetrators and their sponsors and bring them to justice," Buhari said.

--Edited by Jonathan Dart, jonathan.dart@spglobal.com
Posted by Crude Oil Daily at 11:43 AM