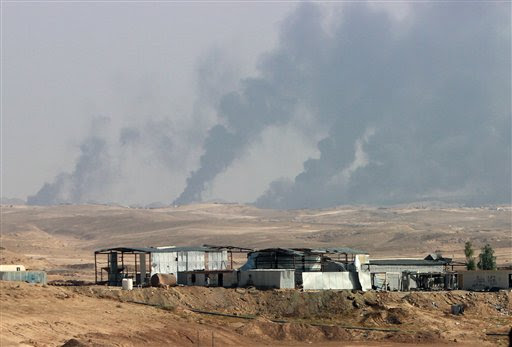 Speaking on condition of anonymity, the officials said that A-10 Warthogs and AC-130 Specter gunships launched 24 precision-guided bombs and strafed the tanker trucks with heavy machine-gun and cannon fire.
The vehicles were gathered at a "fuel collection point" in the Syrian city of Deir ez-Zor.

The planes dropped leaflets warning the drivers to "run immediately or you will be killed," according to the officials, adding that similar leaflets were dropped during U.S. airstrikes last week that destroyed 116 oil tanker trucks.
In addition, the officials said, the planes make several low-level passes over the targets prior to the air assault.

The airstrikes came as Secretary of State John Kerry told NBC's TODAY he believed the Islamist extremists would be overcome.

"I believe ISIS is going to be defeated. ISIS is not 10-feet tall," Kerry said in an exclusive interview. "The pace has to be picked up and more needs to be done and everybody understands that."

ISIS has come under renewed focus after claiming responsibility for the massacre in Paris as well as blowing up Russia's Metrojet passenger jet — attacks in which a total of more than 350 people died.
Russia and France have ratcheted up their bombardment of the country in response to the incidents.
Posted by Crude Oil Daily at 9:58 AM