Austria wants the UK to give its gold back


Austria has unveiled plans to repatriate billions of dollars' worth of its gold reserves back from the U.K., becoming the latest country keen to bring its gold home.

The Austrian central bank currently has 280 tons of gold reserves, worth around $10 billion at current prices. Just 17 percent of these holdings are kept in Austria, with 3 percent in Switzerland and the vast majority -- 80 percent -- in the United Kingdom.


By 2020, however, Austria wants to hold 50 percent of its reserves in Austria, 20 percent in Switzerland and just 30 percent in London. This means moving gold worth $5 billion from the Bank of England across Europe. 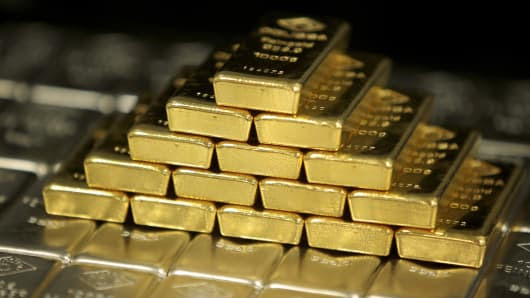 The bank, which revealed the plans in a statement accompanying its annual report on Thursday, did not explain how it would ship the gold, but said: "Starting from mid-2015, the new storage policy will be gradually implemented in keeping with security and logistical requirements."

"A comprehensive review and, if need be, adaptation of the storage policy is scheduled for 2019," it added.

Read MoreWill the US give the Dutch their gold back?

It comes after the country's Court of Audit in February warned that holding so much of its reserves in one place – the Bank of England – "ran a high concentration risk."

Adrian Ash, head of research at Bullion Vault, highlighted the logistics involved in "digging out" the Bank of England's vaults, as it's known.

"According to a Bank of England official speaking a few years ago, a typical 20-ton shipment needs two days' work, with a guy in a forklift driving round to find and collect it," Ash told CNBC via email.

"Moving that by plane would incur a big insurance risk – similar to the 'concentration risk' which the Austrian auditors were maybe right to highlight about holding 80 percent of the nation's gold in one location overseas."

There has also been speculation that the decision to move gold away from the U.K. could be related to the risk of Britain exiting the European Union – known as a "Brexit."

U.K. Prime Minister, David Cameron – who won a general election in the country earlier this month – has promised an in-out referendum by 2017, and the related uncertainty has spooked markets.

However, Austrian Central Bank Governor, Ewald Nowotny, insisted on Thursday that the decision to shift the country's gold reserves was "absolutely not" related to the possibility of a Brexit, Reuters reported.

Instead, Nowotny said that it marked a trend among European central banks of repatriating reserves to their own countries.

Bullion Vault's Ash agreed: "For Germany, the Netherlands and now Austria, it reflects domestic political pressure over the loss of sovereignty from being in the single Euro currency."
"It also marks a deeper anxiety amongst tax payers and savers for the monetary system to have a more solid base than QE (quantitative easing) and zero rates, as we saw with last year's Swiss referendum on boosting gold reserves and holding them all at home."
In January 2013, Germany's central bank, the Bundesbank, revealed plans to move some of its gold holdings from the New York Federal Reserve and the Bank of France. It aims to hold 50 percent of its reserves in its Frankfurt vaults by 2020.

Germany is the second-largest holder of gold reserves, with 3,389 tons, according to the IMF, after the U.S. which has 8,134 tons.
Meanwhile in November last year, the Dutch central bank said it was shipping gold from the U.S. to the Netherlands to "spread its gold stock in a more balanced way."

Notably, however – and unlike the Austria -- both Germany and the Netherlands left the gold they hold in London untouched.