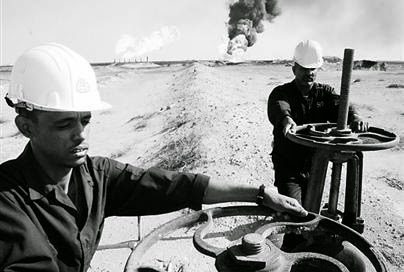 http://www.businessspectator.com.au/news/2014/6/17/commodities/iraq-not-hurting-oil-output-opec
The unrest in Iraq isn't affecting oil markets or the country's oil output, the secretary general of the Organization of the Petroleum Exporting Countries said Monday.

Speaking on the sidelines of the World Petroleum Congress, Abdalla Salem el-Badri said: "Nothing is affected. production is still going well and exporting is going fine."

He said he doesn't expect the recent wave of unrest in the country to affect the balance of the supply and demand of the oil market.

The US and Iran have publicly committed in recent days to provide military support if requested to Iraqi Prime Minister Nouri al-Maliki and help his government repel an offensive the Islamic State of Iraq and al-Sham has launched against Baghdad and other Iraqi cities over the past week.

"I hope that Iraq situation will go back to normal very soon," said the head of OPEC.
Overnight, US oil traded little changed at nine-month peaks, while Brent rose modestly as investors watched the unfolding sectarian conflict in Iraq for signs it could disrupt oil supplies.
US benchmark West Texas Intermediate for July delivery slipped one US cent to $US106.90 a barrel.
In London, Brent North Sea crude, which tends to react more to international geopolitical factors than WTI, rose 48 US cents to settle at $US112.94 a barrel. It was the first day of trade of the futures contract for August delivery.
Posted by Crude Oil Daily at 11:06 AM