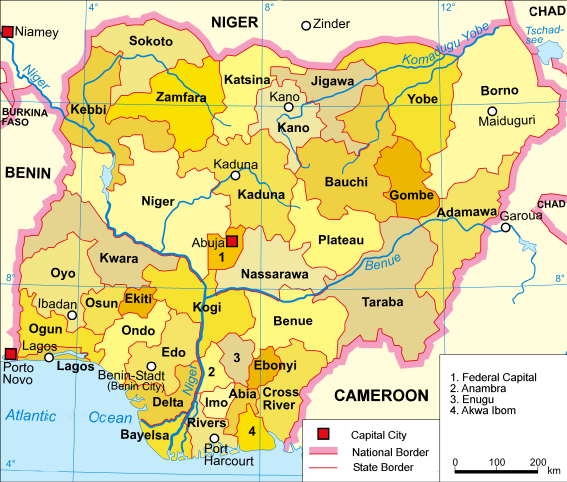 http://www.platts.com/latest-news/shipping/houston/nigeria-emerging-as-major-importer-of-us-jet-21551571
Nigeria has emerged as the second-largest importer of US jet fuel and has also started bringing in atypical US kerosene barrels, according to data released Tuesday by the US Energy Information Administration.

Nigeria imported 864,000 barrels of US jet fuel in February, in line with its monthly average for 2013, when imports quickly bloomed to three times normal on maintenance issues.

"Nigeria is always short," a US jet trader said. "It will come from whatever is the best FOB source, especially given the shallow draft."
February's jet fuel draw from the US was the equivalent of three medium-range cargoes for Nigeria, although it was short of the record 1.58 million barrels imported in November. Nigeria also brought in its largest kerosene cargo -- 292,000 barrels -- in February, and only its fifth-ever kerosene cargo from the US, including one each in July, October and November.

Canada is the only country that regularly takes in full US kerosene cargoes, prized for cleaner-burning, cold-weather properties and used for blending or kerosene heaters. Canada took in 213,000 kerosene barrels in February and a six-year high of 714,000 barrels in January, but generally only takes in a cargo or two a month during the winter.

"Kerosene's main use worldwide is for cooking, not heating," he said.

January and February saw the two highest US kerosene export months since January 2008, when it was 887,000 barrels. Jet fuel exports, meanwhile, registered 4.06 million barrels, compared with 4.27 million in January and 3.19 million in February 2013.

Jet fuel exports have trended higher in the last five years, hitting a record 6.42 million barrels in November before dropping in the winter due to domestic demand. Canada remained the top US jet fuel importer in February, with 1.28 million barrels. After Nigeria came Argentina with 376,000 barrels, its largest-ever US pull. Chile, Mexico and Panama were the only other countries with the equivalent of one cargo of US jet fuel in February.

The upward march for US exports may restart, especially with sources seeing constant demand to Latin America and Canada, and increasing demand to West Africa.

At least five other ships were en route to other parts of West Africa, but those were said more likely to contain gasoline or diesel.

The Nigeria-based Sahara Group is understood to be bringing jet fuel to Nigeria, but sources also noted some major trading companies have shorts in Africa and need the fuel.

Despite being Africa's top crude oil producer, Nigeria imports more than 80% of its petroleum products because of its inadequate domestic refining capacity. Nigeria's four refineries with a combined capacity of more than 450,000 b/d are undergoing scheduled upgrades to improve their reliability.

Nigerian officials have said they want to boost utilization rates for the refineries to about 90% of their installed capacity. The four refineries operated at an average of 31.1% of capacity in 2012, according to recent data from Nigeria's central bank.