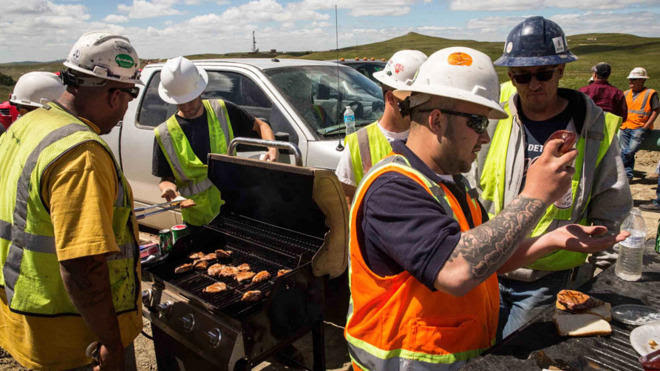 http://news.yahoo.com/north-dakota-trouble-boomtown-093000351.html
By Dan Stewart
When did the boom begin?

About seven years ago. Geologists have known about the Bakken shale foundation, one of the largest oil and natural gas deposits in the world, since the early 1950s. But oil production in the state was slow to develop because it was too difficult and costly to get at the deposits, which are trapped between compressed layers of rock. But as oil prices rose and hydraulic fracturing technology advanced in the 2000s, tapping the ocean of crude suddenly made good economic sense. North Dakota went from being the ninth biggest oil-producing state in 2006 to the second today, with only Texas producing more. There are now more than 9,000 active wells in the state, producing 800,000 barrels of oil a day — about 11 percent of the country's overall production.
What has that brought to North Dakota?

Jobs, money, and people. The state now has the lowest unemployment rate in the country, at 3 percent. Its oil industry employs almost 41,000 people, plus 18,000 jobs in peripheral industries. For those working in the "Oil Patch'' in the western part of the state, the average annual salary is $112,462. The only requirements to find work are a government-issued ID and a clean criminal record. This modern gold rush has lured people from all over America to North Dakota, once one of the country's most sparsely populated states. Terry Ayers drove to Williston in 2011 from Spokane and got an oil job within hours of arriving, earning around three times what he had been making before. "It's a zoo," he said then. "It's crazy what's going on around here."
Has that been good for the state?

For the economy, it's been terrific. The estimated $34.4 billion North Dakota has reaped in revenue from the boom has given it the healthiest balance sheet in the country, with an enviable $1.6 billion budget surplus. But the flood of money and new residents has also caused some severe growing pains. North Dakota's population leaped 7.7 percent in six years. Some small towns have been inundated with new residents; Watford City, for example, went from 1,744 residents to 7,500, including 28 registered sex offenders. The state's infrastructure is buckling under the strain. Housing has become scarce and expensive. Heavy truck traffic has put a strain on the state's roads and bridges, which need an additional $350 million a year for upkeep. Sewage plants are running over capacity, due to new residents and a flood of fracking wastewater. The region's health-care providers are being overwhelmed by scores of workers injured while carrying out dangerous manual jobs. "My work has now been transformed from that of a small family practitioner to basically an ER doc," said Gary Ramage, a physician at McKenzie County Hospital.
Who are these new residents?

Most are single young men lured from other states by the promise of big paychecks. They've transformed once-sleepy small towns, peeling off wads of bills to spend in local bars and strip clubs — and in some cases, on methamphetamine and prostitutes. Williston's population has doubled since 2010, from 15,000 to over 30,000. Most of these workers live in temporary housing known locally as "man-camps," rows of trailers with communal cafeterias and bathrooms, not unlike a military camp. There are 17 man-camps in Williston alone. To cut down on fighting and crime, the oil companies now enforce strict rules on man-camp residents, with a zero tolerance policy for drugs, alcohol, and firearms. "I look at man-camps as being somewhat a necessary evil," said E. Ward Koeser, president of the Williston City Commission.

What do longtime North Dakotans think?

They welcome the infusion of money, but not what comes with it. The cost of living has surged; stores and restaurants have raised prices so they can pay wages of up to $20 an hour to compete with the high-paying oil jobs. High housing demand and skyrocketing rents across the state have also pushed thousands onto the streets, including many newcomers who failed to keep jobs. Homelessness in North Dakota has almost tripled since 2010. In Williston, the Salvation Army has resorted to buying homeless men one-way bus tickets. "Sometimes, they're better off going back home," said Salvation Army employee Joshua Stansbury.
Can the state adjust to the boom?

County legislatures are clamoring for the state to spend some of its budget surplus on new hospitals, infrastructure, and affordable housing. But many state lawmakers remember how quickly oil fortunes can come and go; the state's oil industry tanked after oil prices collapsed in the 1990s, leaving many western counties still paying off debts run up during the 1980s boom. If the current boom ends for some unforeseen reason, state officials fear, they'll wind up with empty medical centers, unused freeways, and empty housing developments. "When Mr. Bakken comes to town, no one can prepare," said Brad Bekkedahl, vice president of the Bismarck City Commission. "It's a good challenge to have, and there's a lot of people that wish they had it. But it's a challenge.
A state full of men

Nine out of 10 workers lured by North Dakota's boom are men. But there is one peripheral industry attracting women to the Oil Patch: exotic dancing. Strippers can bank over $2,000 a night in oil boomtowns. "It's all but guaranteed money," said Susan Shepard, a dancer who worked in Williston for six years. Prostitution is also on the rise, according to law enforcement authorities. Hospitals note that rates of chlamydia doubled between 2010 and 2011. Local women have also complained that the roving bands of unattached, restless young men have created a culture of constant sexual harassment. Williston tattoo artist Christina Knapp, 22, recalled being offered $3,000 to strip naked and serve beer to a group of men. When she refused, the men upped the offer to $7,000. "I said I make more money doing my job than degrading myself to do that," she said.
Posted by Crude Oil Daily at 11:16 AM