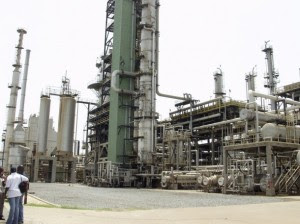 The Tema Oil Refinery (TOR) is feared to have lost more than $63 million since July 2012 as a result of its inability to process and refine crude because of broken equipment.

Ghana’s only state-run refinery has been operationally idle since July last year due to the breakdown of critical equipment.

In August last year, Reuters reported that both the main crude distillation unit and the residual fuel catalytic converter of the 45,000 barrels-per-day refinery plant had been shut down.

Reuters reported that a close source within TOR said: “The changers (a component of the plant) were blocked and needed to be replaced but lack of funds has delayed the work”, adding that some boilers had worn-out.

The faulty equipment were expected to have been replaced last year.

TOR has been plagued by repeated shut downs over the past few years, often due to unavailable crude after its main lender Ghana Commercial Bank (GCB) cut off support due to unpaid debts.

In May last year, TOR’s Managing Director Ato Ampiah announced that management had secured some $900 million in financing from banks, BNP Paribas and Standard Chartered to help the plant settle its debt backlog and purchase crude supplies.

Even though the government defrayed the state Bank’s debt a year earlier, TOR still remained indebted to some bulk oil suppliers.

In August last year, Reuters said its source within TOR said: “We are still grappling with issues over crude availability, but for now that was not the key reason for the current shutdown.”

Kwesi Pratt Jr told Metro TV’s Good Morning Ghana Newspaper review programme on Wednesday February 13 that: “TOR has not produced a teaspoon of crude oil since July, as a result the Tema Oil Refinery is losing 300,000 dollars a day”, he charged adding: “Calculate and see how much we are losing”.
Posted by Crude Oil Daily at 2:14 PM