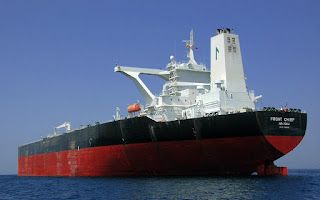 A surge in oil-tanker rates for vessels shipping West African crude to the U.S. may restrict ship supply in the Persian Gulf as the rally lures vessels to the Atlantic Ocean, Arctic Securities ASA said.

Earnings rose almost threefold to $23,314 a day this month for ships hauling 1 million-barrel cargoes of West African oil to the U.S., according to data from the Baltic Exchange in London. Very large crude carriers with twice the capacity are making $17,253 shipping Persian Gulf oil to Japan, the bourse’s data show.

The price rally from West Africa may cause owners to send VLCCs in ballast to the region after the ships deliver cargoes to Asia, Arctic analyst Erik Nikolai Stavseth said in an e-mailed note today. That would limit how many are available in the Persian Gulf, the normal return destination, he said. Ballasting normally refers to sailing with sea water to keep a ship stable when it doesn’t have a cargo.

To contact the editor responsible for this story: Alaric Nightingale at anightingal1@bloomberg.net
Posted by Crude Oil Daily at 11:44 AM