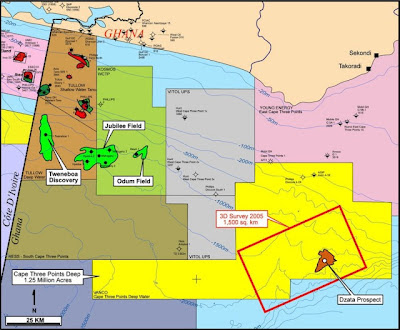 Ghana and its partners on the Jubilee oil field, which include Tullow Oil Plc (TLW) and Anadarko Petroleum Corp. (APC), will invest an estimated $20 billion over the next 10 years to develop newly discovered oil fields.

“We will raise the money in collaboration with our partners,” said Nana Boakye Asafu-Adjaye, chief executive officer of the Ghana National Petroleum Corp., in a July 3 interview in the capital, Accra. “We have made clusters of discoveries and these need to be developed.”

Jubilee, which began production in 2010, is operated by London-based Tullow, which also owns 35.5 percent of the field. Anadarko and Kosmos Energy (KOS), both based in the U.S., each hold 24.1 percent and GNPC 13.6 percent. Sabre Oil & Gas Ltd. holds 2.7 percent.

By May 31 Jubilee had produced 35 million barrels, Asafu- Adjaye said. Output from the Jubilee oil field is now at 63,000 barrels per day, with production expected to reach an average of 90,000 barrels this year, according to Tullow.

New discoveries in the Deep Water Tano Block include Tweneboa and Enyenra as well as other clusters of discoveries such as Mahogany, Teak, Akasa and Banda, Asafu-Adjaye said.

Following Jubilee’s start up oil became Ghana’s third- biggest export after gold and cocoa last year.
Shares of Tullow, which has the most exploration licenses of any oil company operating in Africa, fell 1.7 percent, to 1,476 pence at the close in London, giving the company a market value of 13.4 billion pounds ($20.8 billion).