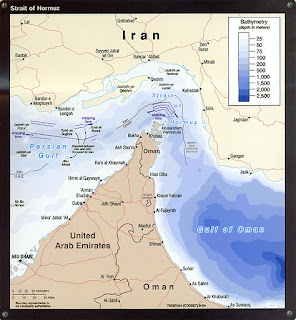 Ramin Mehmanparast, spokesperson for Iran's Foreign Ministry, laid it out for all to hear. Reacting to the possibility of new Western penalties that could reduce its oil exports, he issued a warning that oil prices could more than double to $250/barrel ("Penalties May Send Oil Prices Soaring, Iran Warns," New York Times, 12.06.11).

Really!? Are you afraid? Well don't be. Should Europe cut off imports of Iranian oil, as they already have with Syrian oil in solidarity with the Syrian people's suffering under its current murderous rulers, the impact on the oil market would be minimal. For Iran, given the impact of economic sanctions already in place and beginning to have meaningful effect, it could be fatally disruptive to the current regime.

Consider the following: Europe's daily imports of Iranian oil are approximately 450,000 barrels/day. Europe's total consumption of oil exceeds 15 million barrels/day. The International Energy Agency, charged with the oversight of Europe's strategic oil reserves, controls a supply equivalent to 90 days of European oil consumption, or well in excess of a billion barrels of oil, near double the 750 million barrels held in the U.S. Strategic Petroleum Reserve. Enough, in itself, to cover the Iranian shortfall for several years, more than enough time to effect regime change in Iran.

Then, of course there are the millions of barrels/day excess capacity that could be brought on stream from the Gulf Cooperation Council comprising Kuwait, Bahrain, Qatar the United Arab Emirates, and most especially Saudi Arabia, whose interests viz a viz Iran are in line with the interests of Europe, the United States and the rest of the world's unease at the prospect of nuclear weapons in the hand of messianic fanatics.
Posted by Crude Oil Daily at 3:08 PM