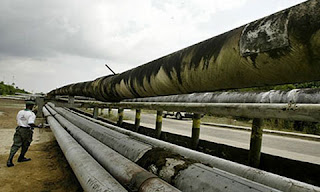 With the hue and cry over the menace of pipeline vandalism in Nigeria, a Kano-based engineer, Ado Abdu, Technical Director, Geological Drilling Investment Ltd., has said that both the federal and state governments have not shown any interest in his newly developed device to check the incessant menace in the country.

Ado Abdu, had on November 24, 2010, made a second presentation of his prototype of system equipment to the Department of Petroleum Resources, DPR, of the Ministry of Petroleum Resources in Lagos to demonstrate that there is an existing technology developed by him that can be used to mitigate against pipeline vandalism in Nigeria.

The Nigerian National Petroleum Corporation (NNPC) estimates that that the country has lost over N175 billion to repair broken pipelines between 2000 and 2009 following a total 15,685 breaks in the fuel pipeline network. He said the technology, called Hi-Speed USB 9162, is a PC based software and hardware that uses a combination of modular hardware, application software, and computer to take measurements and data acquisition and instrument control applications to measure an electrical or physical phenomenon such as frequency, voltage, current, temperature, pressure or sound.

When contacted for comments by Daily Trust, the DPR's spokespersons, Mrs Balema Osibodu asked our reporter to send the details of the engagement with the inventor for her to make enquiries, which was done, but the following day she said she was unable to trace such file. Mrs Osibodu said she needs more time to find out from her technical department.

But Abdu said, being the only African to develop such a device, he had made paper presentation at the United Nations (UN) on non-destructive testing, NDT, an engineering field used to identify and solve problems without creating additional problem. He also said he had partnered with NASA in the USA, who supported his Phd programme, but wanted to divert the NDT project to the production of nuclear warhead that cannot be detected.

Having refused NASA's bidding, he said, he turned his project to something that will benefit Nigerians and improve humanity by developing the code and equipment for detecting vibration.

Ado Abdu said pipeline vandals who, according to him, operate like a cartel in Nigeria, have developed a device called hot tapping machine which they clamp on pipelines no matter the pressure and create a diversion without any spillage or explosion and thereafter create their own pumping station for the diversion of crude oil. He said if the authorities wish to monitor Nigeria's pipelines, the Hi-Speed USB 9162 device can be relayed to 150 monitoring stations and they would be able to see what is happening to the pipelines through sensors that can pick vibration and frequency.
Click to learn more...

Each sensor can cover 10-20 kilometers and every activity along any of Nigeria's approximately 6,900 km pipeline, even scratching it can trigger the sensor and it could also be programmed to at least 50 GSM handsets to send text message alerts.

Abdu, who said he spent over five months in some of Nigeria's creeks, said the sensor, called Compact Rio, has a silicon chip, which on the first day in the creeks detected 38 points where oil was being siphoned. He said after NNPC decided to cut off the 38 points he started to receive death threats on his phone and that surprisingly the following day, 12 new points had sprung up overnight.

Ado Abdu said GPS is also used to give each unit a global clock time that allows phased analysis between units to be carried out when an attack happens and gives the exact location and image of the people touching your pipeline and you can have their photographs.

He said he wants stakeholders to avail themselves of this new means developed by an indigenous person because the petroleum ministry has confirmed that over 100,000 barrels are lost every day to vandals.

He wondered why after the initial interest shown by the DPR, there has been no response from it again, adding that two years ago, he also wrote to Kano State government requesting for assistance without yielding results.

Ado said some foreigners have already approached him expressing interest in the new device created by him and said he is ready to offer consultancy to any arm of government interested in the new product.
Posted by Crude Oil Daily at 4:46 PM