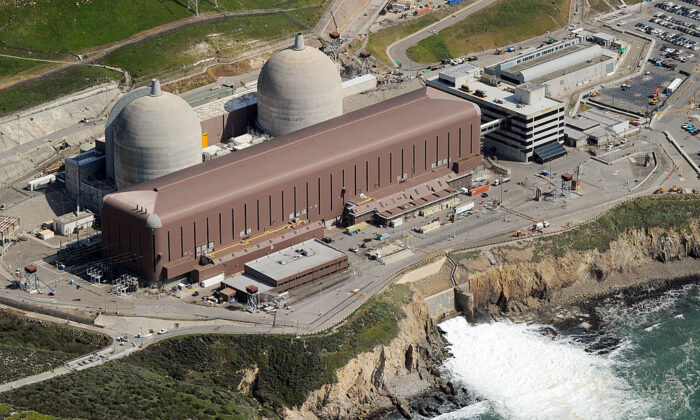 Aerial view of the Diablo Canyon Nuclear Power Plant which sits on the edge of the Pacific Ocean at Avila Beach in San Luis Obispo County, Calif., on March 17, 2011. (Mark Ralston/AFP via Getty Images)

California’s last operating nuclear power plant was given another funding boost Nov. 21 as operators seek to keep it running for another eight years.

“This is a critical step toward ensuring that our domestic nuclear fleet will continue providing reliable and affordable power to Americans as the nation’s largest source of clean electricity,” U.S. Secretary of Energy Jennifer Granholm said in a statement on Nov. 21.

Nuclear power provides half of the nation’s carbon-free electricity, according to the agency. Since 2013, 13 reactors across the United States have shuttered.

Final terms of the funding will need to be finalized by the Energy Department, officials said. The plant produces about 15 percent of California’s renewable energy.

Politicians applauded the funding that will help extend the life of the once-doomed power plant.

“This investment creates a path forward for a limited-term extension of the Diablo Canyon Power plant to support reliability statewide and provide an onramp for more clean energy projects to come online,” California Gov. Gavin Newsom said in a statement.

Newsom signed legislation Sept. 1 to reverse plans to terminate the plant, which was scheduled to close in 2025.

The bill was essential to prevent rolling blackouts and increased electricity prices in California, according to author Sen. Bill Dodd (D-Napa). It allows Pacific Gas & Electric (PG&E) to continue operating the plant until 2030. It also authorized a forgivable loan of $1.4 billion from the state to help extend the operations.

PG&E agreed six years ago to close the plant amid pressure from environmental groups and the local community.

Sen. Dianne Feinstein (D-Calif.) said in a statement she welcomed the news.

“This short-term extension is necessary if California is going to meet its ambitious clean-energy goals while continuing to deliver reliable power,” Feinstein wrote. “This is especially critical as California’s electric grid has faced increasing challenges from climate-fueled extreme weather events.”

Last month, PG&E applied for a new operating license from the Nuclear Regulatory Commission, according to Feinstein’s office.

Several environmental groups objected to the permit renewal. Mothers for Peace, Friends of the Earth, Environmental Working Group, and Committee to Bridge the Gap sent a letter to the U.S. Nuclear Regulatory Commission asking members not to resurrect the renewal application.

An attorney for the San Luis Obispo-based anti-nuclear group Mothers for Peace claimed in the letter a radiological accident at the earthquake-vulnerable reactors could present catastrophic public health, economic, and environmental impacts.

Following the announcement of the funding, the Samuel Lawrence Foundation, a nonprofit anti-nuclear-waste organization based in San Diego, was disappointed by the federal funding allocation, according to a Twitter post.

“We are disappointed in our government supporting the extension of Diablo Canyon [N]uclear [P]ower [P]lant. How can we transition towards sustainable clean energy while prioritizing nuclear over wind and solar? Not to mention the threat posed by the waste!” the foundation wrote.