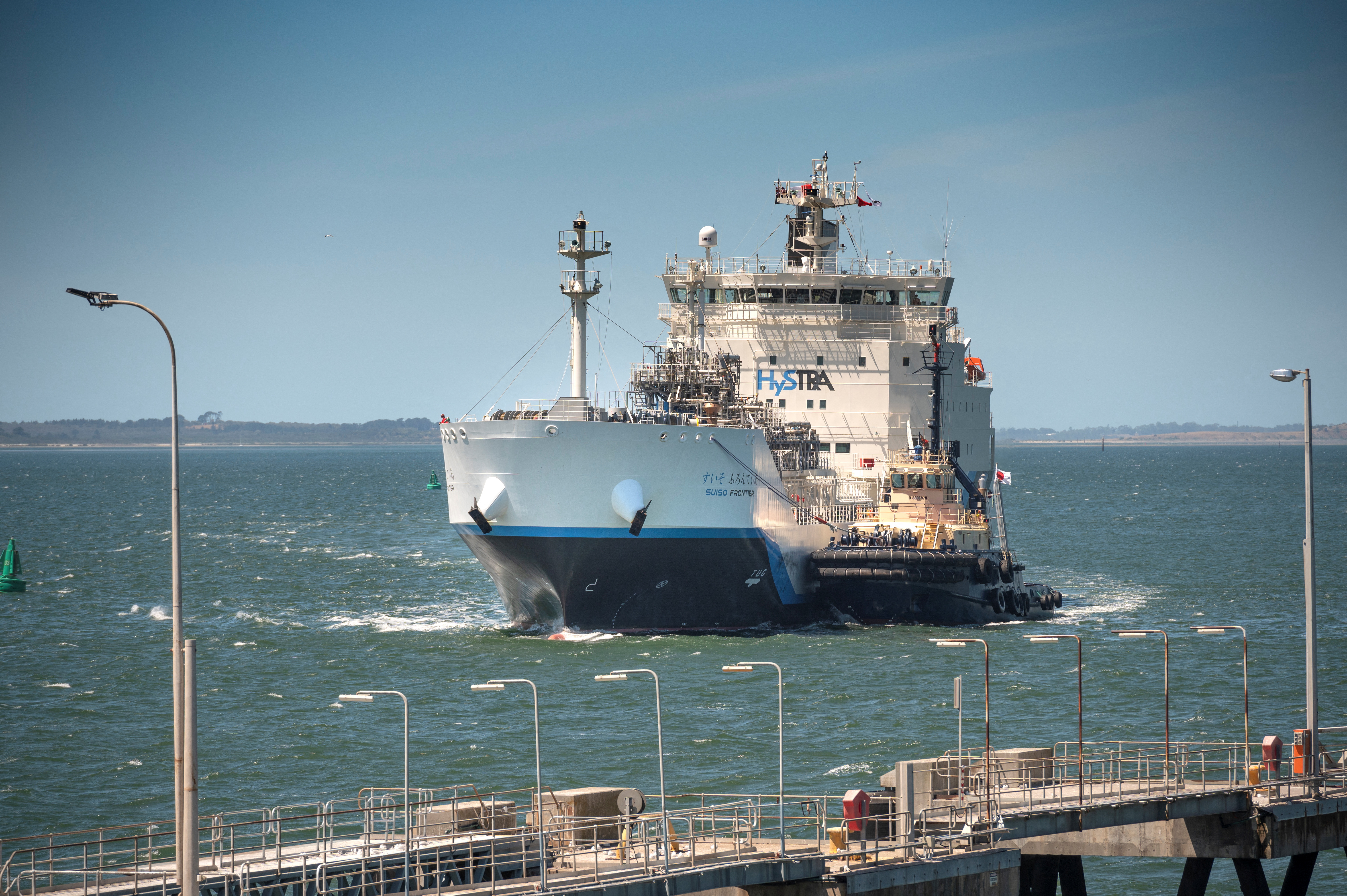 The Suiso Frontier, the world's first hydrogen carrier, built by Japan's Kawasaki Heavy Industries, is pictured upon its arrival from Kobe, Japan at the Port of Hastings in Victoria, Australia January 20, 2022. Courtesy HySTRA/Handout via REUTERS

MELBOURNE, Jan 21 (Reuters) - A Japanese-Australian venture producing hydrogen from brown coal is set to start loading its maiden cargo on the world's first liquid hydrogen carrier on Friday, in a test delayed by nearly a year because of the COVID-19 pandemic.

The Suiso Frontier, built by Japan's Kawasaki Heavy Industries (KHI) (7012.T), arrived Australiathis week from Kobe, following a longer trip than the expected 16 days as theship dodged bad weather and rough seas, said a spokesperson for the Hydrogen Energy Supply Chain (HESC)venture. The ship is scheduled to head back to Japan in about a week.

Led by KHI, HESC is a A$500 million ($360 million) coal-to-hydrogen project backed by Japan and Australia as a way to switch to cleaner energy and cut carbon emissions.

Hydrogen, seen as a path to decarbonising industries that rely on coal, gas and oil, is key to Japan's goal to achieving net-zero emissions by 2050. Australia aims to become a major exporter of the fuel.

The Australian government on Friday committed a further A$7.5 million for HESC's A$184 million pre-commercialisation phase, and A$20 million for testing a capture and storage project for carbon dioxide released in the coal-to-hydrogen process to create a carbon neutral product.

Last year, HESC started extracting 70 kg of hydrogen a day from brown coal in the Latrobe Valley, about 135 km (84 miles) east of Melbourne, where brown coal mines have long fuelled some of Australia's most polluting power stations.

The hydrogen is produced by reacting coal with oxygen and steam under high heat and pressure. It is then trucked to a port site where it is cooled to minus 253 degrees Celsius (minus 423 Fahrenheit), liquefying it for export.

The partners are looking to produce up to 225,000 tonnes of hydrogen a year.

They will need to make a final investment decision by 2025, with Australia racing against countries in the Middle East and elsewhere to produce carbon neutral hydrogen, said Jeremy Stone, a director of J-Power, one of the HESC partners.