U.S. takes aim at the power behind Venezuela’s Maduro: his first lady 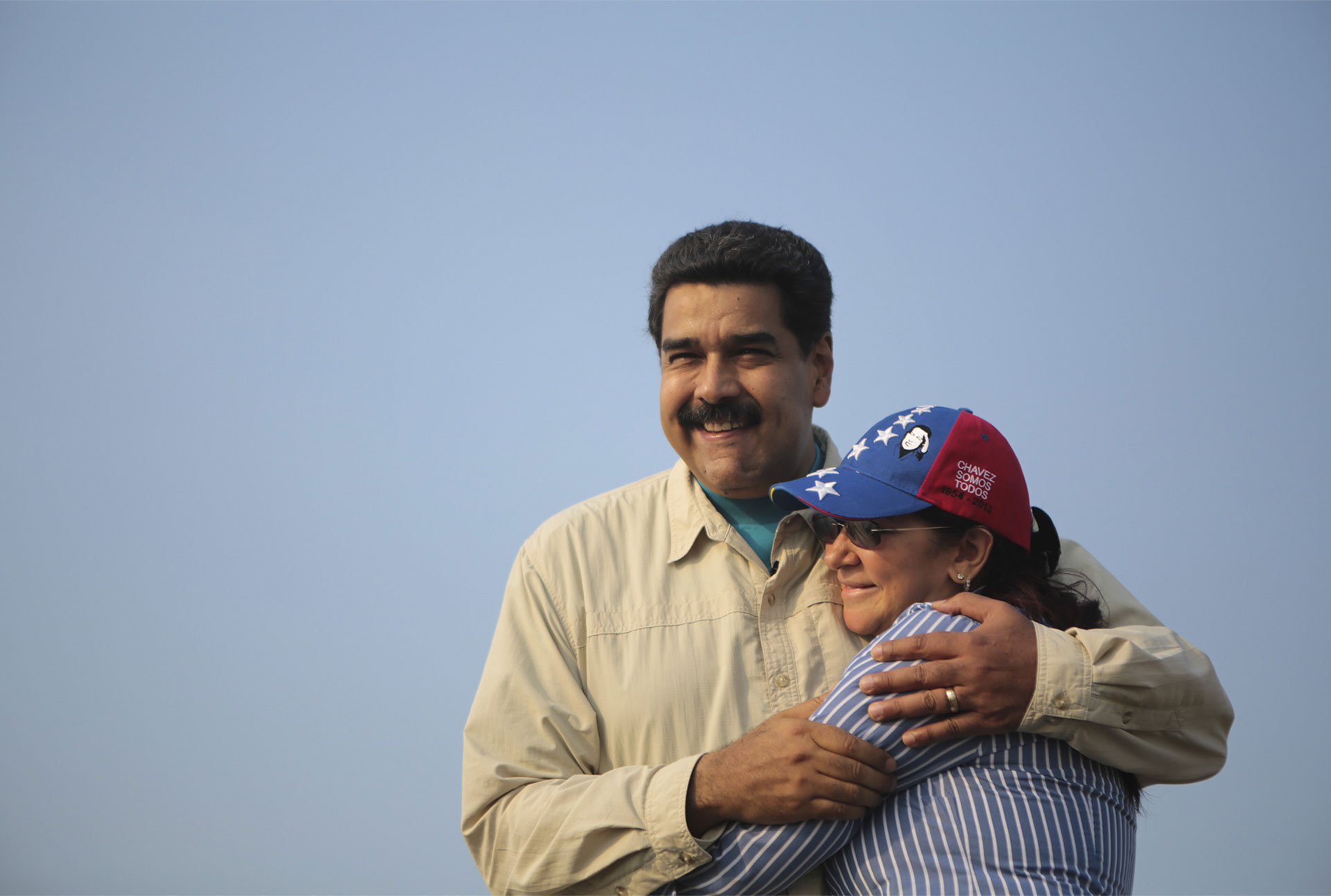 HAPPY UNION: Maduro and Flores formed a political and private partnership when they both advised an ascendant Hugo Chávez. Maduro would wink at Flores in early meetings, drawn by her “fiery character.” REUTERS/Handout/Venezuelan presidency


First lady Cilia Flores has a long record as a power broker in Venezuela. Now, with the help of a jailed former bodyguard, U.S. prosecutors are preparing to charge her with crimes that could include drug trafficking and corruption.

CARACAS/WASHINGTON – Four years ago, a bit player in the Venezuelan leadership was arrested in Colombia and extradited to the United States to face drug charges. He proved to be an important catch.

Now, with help from Lamas’ testimony, the United States is preparing to charge Flores in coming months with crimes that could include drug trafficking and corruption, four people familiar with the investigation of the first lady told Reuters. If Washington goes ahead with an indictment, these people said, the charges are likely to stem, at least in part, from a thwarted cocaine transaction that has already landed two of Flores’ nephews in a Florida penitentiary.

Nicole Navas, a spokeswoman for the U.S. Department of Justice, declined to comment on any possible charges against Flores. Flores and her office at the National Assembly didn’t respond to questions for this article. Jorge Rodríguez, Venezuela’s information minister, told Reuters in a text message that its questions about the possible U.S. indictment of Flores were “nauseating, slanderous and offensive.” He didn’t elaborate.

In a series of interviews with Reuters, the first Lamas has given since his arrest, the former bodyguard said Flores was aware of the coke-trafficking racket for which her two nephews were convicted by a U.S. court. Flores also used her privileged position, he said, to reward family members with prominent and well-paid positions in government, a claim of nepotism backed by others interviewed for this article.

Speaking behind reinforced glass at the prison in Washington, D.C., where he is detained, Lamas told Reuters he is speaking out against Flores because he feels abandoned by the Maduro administration, still ensconced in power even though many of its central figures, including the president, have also been accused of crimes. “I feel betrayed by them,” he told Reuters.

In late March, U.S. prosecutors indicted Maduro and over a dozen current and former Venezuelan officials on charges of narco-terrorism and drug smuggling. Maduro, now in his eighth year as Venezuela’s president, for years sought to flood the U.S. with cocaine, prosecutors alleged, seeking to weaken American society and bolster his position and wealth.

Maduro’s office didn’t respond to requests for comment. In a televised speech after the indictments, he dismissed the charges against him and his colleagues as a politically motivated fabrication by the administration of U.S. President Donald Trump. “You are a miserable person, Donald Trump,” he said.

The March indictments and the possible charges against Flores come amid a fresh campaign by Washington to increase pressure on Maduro. His enduring grip on power, some U.S. officials say, is a source of frustration for Trump.

Starting in 2017, the U.S. Treasury Department sanctioned the Socialist leader along with his wife and other members of the Maduro “inner circle.” The swipe at Flores enraged Maduro. “If you want to attack me, attack me,” he said in a televised speech at the time. “But don’t mess with Cilia, don’t mess with the family.”

Leveraging the economic fallout from the coronavirus crisis in Venezuela, the White House now hopes it can topple a leader who has weathered years of tightening economic sanctions, civil unrest and international isolation.

Washington has accused Maduro and his circle of looting Venezuela of billions of dollars. But it’s unclear how much personal wealth he and Flores possess. Neither the president nor the first lady disclose income statements, tax returns or other documents pertaining to their personal finances. After U.S. prosecutors charged Maduro, the Justice Department said it had seized more than $1 billion in assets belonging to dozens of defendants connected to the case. The charges didn’t detail those assets or specify who holds them.

Flores is a longtime strategist and kingmaker in the ruling Socialist party. She first gained prominence as a lawmaker and confidante of the late Hugo Chávez, Maduro’s predecessor and mentor. She doesn’t hold an official role in Maduro’s cabinet. Still, the probe against her underscores the vast influence she wields, particularly in helping Maduro outmaneuver rivals inside and outside Venezuela.

In addition to Lamas, Reuters interviewed more than 20 people close to and familiar with Flores. They portray her as a shrewd and stealthy politician who now brandishes much of the power of her husband’s office, demanding important briefings even before the president and personally negotiating with foreign emissaries, rival lawmakers and others.

When the opposition-led National Assembly tried to oust Maduro last year, Flores ordered security officials to deliver intelligence on the matter directly to her, according to Manuel Cristopher Figuera, the head of the country’s intelligence agency then. Figuera was one of a handful of senior Venezuelan officials who at the time considered trying to negotiate an exit from power by Maduro with the United States. Figuera fled Venezuela when the effort failed.

“Flores has always been behind the curtain, pulling the strings,” Figuera told Reuters.

Flores has sought personal concessions in recent years in negotiations with the United States. According to five people familiar with the discussions, Flores instructed intermediaries to ask U.S. envoys for liberty for her jailed nephews. In exchange, these intermediaries said Venezuela would release six imprisoned executives of Citgo Petroleum Corp, the U.S. refining unit of Venezuela’s state-run oil company. The executives, arrested by Venezuela in 2017 and charged with embezzlement, are widely considered by human rights activists and many in the business community to be political prisoners.

That overture, reported here for the first time, failed.

But Washington knows Flores’ clout. “She is probably the most influential figure other than Maduro,” Fernando Cutz, a senior White House adviser on Latin America during Trump’s first year in office, told Reuters.

Earlier this year, according to people with knowledge of her efforts, Flores personally pressed crucial opposition lawmakers to support a Maduro ally to head the National Assembly, until then considered the last independent government institution in the country. As Reuters reported in March, people familiar with lobbying of the lawmakers say ruling party operatives paid bribes to rivals who switched sides. Reuters couldn’t determine whether Flores played any role in such payments.

Little is known about the first lady outside Venezuela, particularly the extent of her role in Maduro’s government and her dealings that help it survive. In their first interrogation of Lamas after his arrest in Colombia, U.S. Drug Enforcement Administration agents had one request, he recalled: “Tell us about Cilia Flores,” they said.

Michael D. Miller, a DEA spokesman, referred questions regarding the case to the Justice Department.

Lamas, now 40, spent over a decade guarding Flores – first when she was a lawmaker and headed the National Assembly, later when she became first lady. After his extradition in 2017, Lamas agreed to a plea deal with U.S. prosecutors, according to a confidential Justice Department document reviewed by Reuters. The agreement hasn’t been previously reported.

In the plea deal, Lamas admitted to charges of drug trafficking and agreed to cooperate as a witness in investigations related to his case. The Colombian court order that approved his extradition, also reviewed by Reuters, said Lamas conspired to ship cocaine from Venezuela on U.S.-registered aircraft. Neither the Colombian court order nor the Justice Department document mention Flores, Maduro or others in the family.

Because of the terms of the plea agreement – he said he is still awaiting sentencing and continues to testify in related investigations – Lamas declined to discuss specifics about the case against him. His lawyer in Washington, Carmen Hernandez, also declined to comment.

The information he is providing investigators, including details on Flores’ alleged role in the drug-trafficking plan by her nephews, is deemed credible by U.S. authorities, according to people familiar with the probes. Mike Vigil, a former DEA chief of international operations, told Reuters the DEA gives “high significance” to Lamas’ testimony.

Flores was born October 15, 1956, in Tinaquillo, a small city in northwestern Venezuela. The youngest of six siblings, she lived in a mud-brick shack with a dirt floor, locals recall. Her father was a salesman, traveling to nearby towns to hawk sundry goods. While still a child, she and her family moved to Caracas, Venezuela’s capital.

A good pupil, Flores enrolled in a private university and studied criminal law. There, she met Maikel Moreno, a lifelong friend and a lawyer she would eventually help become Venezuela’s chief justice. Moreno, a Maduro ally and a controversial figure in his own right, was one of those indicted by Washington last March. Moreno didn’t respond to requests for comment; in a tweet, he denounced Washington for trying to “hijack Venezuelan justice.”

As a student, Flores showed little interest in politics, according to people who knew her. She worked part-time at a police station, transcribing statements from witnesses, and married a longtime boyfriend, a police detective, with whom she had three boys. Upon earning her law degree, she worked for most of the next decade as a defense attorney for a private firm.

In 1989, a fuel hike sparked riots that shook Caracas and awakened in Flores what she later described to state television as a “revolutionary calling.” Hundreds of protesters, angry with corruption and widening inequality in the oil-producing country, died in clashes with security forces.

The event, known as the Caracazo – roughly, the big Caracas awakening – also inspired Chávez. As inflation, food shortages and other hardships worsened, Chávez, an Army lieutenant colonel, in 1992 staged a failed coup. He was arrested and jailed at a military barracks.

Flores discovered a hero. She took to spraypainting Chávez’s name around Caracas. “I saw him in that moment as I would in the 20 years I spent near him,” she later told state television. “Authentic.”

She sent Chávez a letter offering to aid his defense. He accepted. Soon she was counseling Chávez and helping him answer letters from thousands of supporters.
On one early visit, she met a Caracas union leader who was also advising Chávez: Maduro. In a televised speech years later, Maduro said he was drawn to her “fiery character.” He began to wink at her, he said.
As it happened, both were divorcing their spouses. They began dating and eventually became a couple. “We shared the same dreams,” Flores later told state television.

In 1994, Chávez received a presidential pardon. Flores and other advisors suggested he reinvent himself as a civilian and rally support with promises to empower the poor. By 1997, Flores was part of the campaign committee that would secure Chávez’s election the next year as president. Maduro was elected as a legislator.
Posted by Crude Oil Daily at 3:18 PM