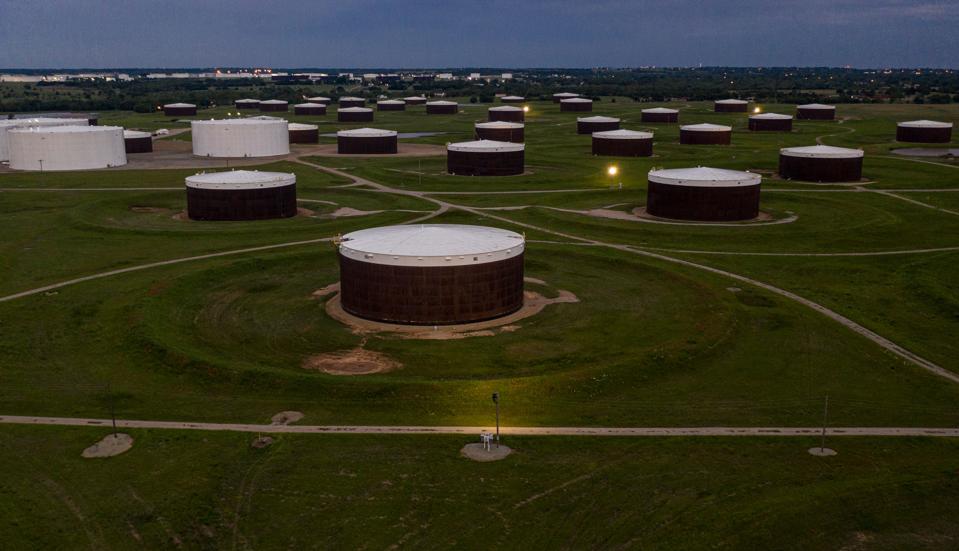 AFP via Getty ImagesAn aerial view of a crude oil storage facility is seen on May 5, 2020 in Cushing, Oklahoma. - Using his fleet of drones, Dale Parrish tracks one of the most sensitive data points in the oil world: the amount of crude stored in giant steel tanks in Cushing, Oklahoma. The West Texas Intermediate oil stored in the small town in the midwestern United States is used as a reference price for crude bought and sold by refiners in Asia, hedge funds in London and traders in New York. (Photo by Johannes EISELE / AFP) (Photo by JOHANNES EISELE/AFP via Getty Images)


Cushing is going to fill up!  Cushing is filling up!!!  Of all the hyperbolic, buffoonish comments uttered by talking heads on CNBC and in the financial media, this is the worst.  According to the most recent data provided by the EIA, Cushing has 93.346 million barrels of storage capacity, of which 76.093 million barrels’ worth is classified as working storage.  The EIA’s weekly data showed 65.446 million barrels in storage at Cushing as of May 8th, a figure that declined by 3 million barrels in last week’s data.  So, even at its peak, Cushing was 86.0% full.  Then how could Cushing storage possibly be “running out” with 14% of existing capacity available and more implicitly in reserve?
Cushing has never run out of storage. Cushing never will run out of storage.

In the past eight years, Cushing’s working storage capacity, as measured by the EIA, has increased 58.5%.  The amount of oil stored at Cushing is more than three times the amount stored there 15 years ago.  America is producing more oil.  America’s midstream companies somehow noticed this trend and have produced more storage tanks in which to store that oil.

But as the contract for West Texas Intermediate crude for June delivery finished its trading life Monday at 2:30 ET quoted at $32.13 per barrel, that does not explain what happened the last time.  Last month’s contract (for May delivery) finished trading on April 21st at $11.57 per barrel, after famously closing at (-$37.63) per barrel on the day prior to expiration.
Why?

It’s all part of a trade.  Last month that trade was “short oil.”  This month the trade became “long oil.”  It’s that simple.  The commodities markets are characterized by wild swings in sentiment and just as wild swings in price.  This is why producers and consumers hedge, and use oil contracts to balance out their natural biases (producers are naturally short and consumers are naturally long.)

But the headlines in April screamed “oil prices turned negative because there was no place to put it,” when the government’s own figures show there was, in fact, ample space to store oil.  Why?  Well, renting Cushing storage—controlled by big midstream players—is not as easy as renting a U-Haul or as scalable as leasing server space from Amazon AMZN .  As the EIA stated in its April 27th, 2020 Today in Energy publication:

Although EIA data indicate that some storage remains available at Cushing, some of this physically unfilled storage may have already been leased or otherwise committed, limiting the uncommitted storage available for financial contract holders without pre-existing arrangements. In this case, these contract holders would likely have to pay much higher rates to storage operators for any uncommitted space available.  Taken together, these factors suggest that the phenomenon of negative WTI prices is mainly confined to the financial markets.

As with any financial product, when amateurs get caught short market inefficiencies occur.

The existence of the USO oil ETF, a frequent target of my criticism in my Forbes columns, only exacerbates this situation.  Because USO’s sponsor, USCF, states quite clearly in its many SEC filings that it has no means to take delivery of physical oil and no desire to do so, USO serves to create more paper contracts and offset the natural balance of hedging.  As those contracts are rolled—though USO has changed its contract purchasing/selling process several times in the past month—that creates a net shortage of the paper, and the markets can get wacky.

So, for those who like to proclaim European superiority over American methods, the Euros have us beat when it comes to oil pricing.  Brent oil trades only in paper form, and unlike Cushing, Brent is not a physical town, but a location of offshore platforms (three of four of which have been shut down as the field matures) in the North Sea.  No one can deliver oil to Brent because there is no such place, although the contract price is composed of a mix of three other locations that are actually physically sited.

This is not meant as any disrespect to the good folks of Payne County, Oklahoma.  Cushing is important, and a quick check of any pipeline map would show that most of the U.S.’ massive hydrocarbon superhighways have been built to stop by Cushing to “count” in oil delivery figures before heading elsewhere to be refined.  The nearest refinery to Cushing is a one-hour drive north up OK-18 in Ponca City at Phillips 66 PSX ’s facility, and the salt caves that hold the U.S.’ strategic petroleum reserve sit in four sites along the Gulf Coast, the closest one to Cushing located in Bryan Mound, TX, about 550 miles away.

So, contrary to the takeaway from articles like this credulous Bloomberg piece, Cushing has plenty of space. Those who hold short positions in oil may not want you to believe that, but it's the truth.  Remember always that those same folks are just as likely to be the ones telling you—via compliant reporters in the mainstream financial media—that all is fine and dandy in the energy markets when they happen to be long those very same contracts.
It’s probably best not to listen to them at all.
Posted by Crude Oil Daily at 1:05 PM