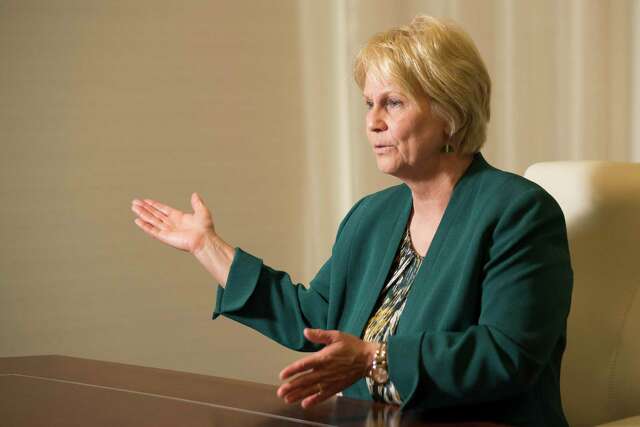 
Occidental Petroleum warned shareholders Wednesday that it may not be able to sell its assets quickly enough to pay back debt incurred after its high-profile takeover last year of rival Anadarko Petroleum.

The Houston oil and gas producer planned to sell $15 billion of assets by late 2021 to repay investors who funded its $38 billion Anadarko acquisition in August. But the value of many of Oxy’s assets have taken a big hit during the recent oil crash. Oxy on Wednesday said it did not close on any sales during the first quarter, and was forced to write down $1.4 billion of its assets as oil prices plummeted.

“Travel restrictions and the fall in commodity prices have severely disrupted the market for asset sales,” CEO Vicki Hollub said in a call with shareholders and analysts Wednesday. “Given the market condition, we are no longer confident in raising sufficient funds from just divestitures to address all of our near-term debt maturities, but have numerous options available.”

Oxy has so far paid about a third of its $39 billion of debt, and has a $6 billion debt payment due next year. The company on Tuesday said it had $1 billion in cash and an additional $5 billion under its revolving line of credit as of April 30.

RELATED: With $39 billion in debt, can Houston-based Occidental Petroleum survive the oil crash?

The company is soliciting bids for Anadarko oil and gas properties in Wyoming, and hinted it is open to selling assets in Algeria, West Texas and Colorado if the right offer comes along.

“Algeria is a core asset for us moving forward, but if we do get an offer we can’t refuse, I’m sure the ministry would be interested as well,” Hollub said. “While we remain committed to closing divestitures over time, we will not sacrifice value to close transactions quickly.”

Oxy staked its future on the Anadarko acquisition, which made the company the largest player in the Permian Basin of West Texas, the nation’s most productive shale play. The megadeal represented a huge bet on oil prices rising amid the shale boom, which suddenly evaporated as the coronavirus pandemic shut down economies around the world.

The company had expected to grow by 5 percent annually after merging with Anadarko. Now its priority is to pay its debt and survive the collapse in oil prices.
Posted by Crude Oil Daily at 12:34 PM