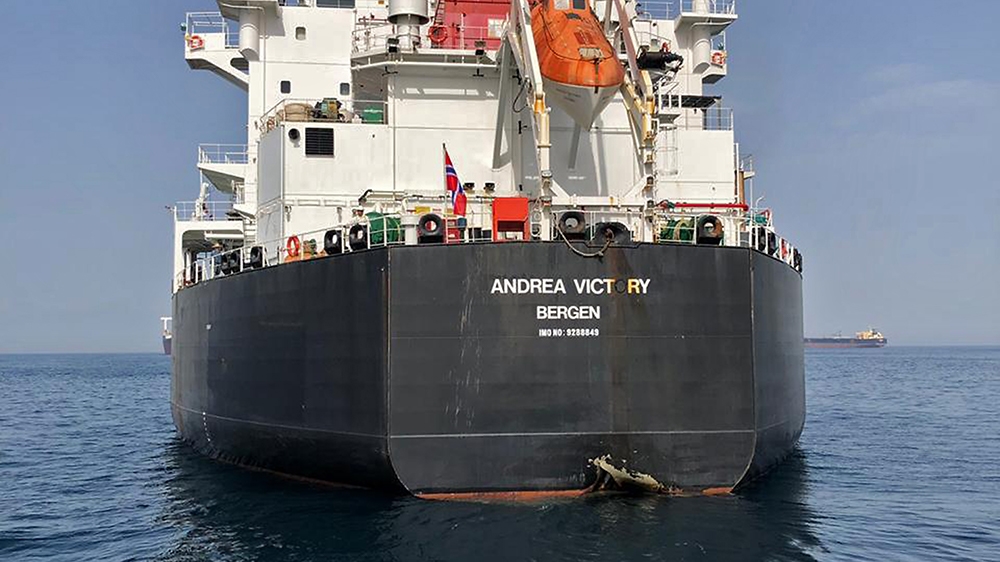 
LONDON/OSLO (Reuters) - Iran’s elite Revolutionary Guards (IRGC) are “highly likely” to have facilitated attacks last Sunday on four tankers including two Saudi ships off Fujairah in the United Arab Emirates, according to a Norwegian insurers’ report seen by Reuters.

The UAE, Saudi Arabia and Norway are investigating the attacks, which also hit a UAE- and a Norwegian-flagged vessel.

A confidential assessment issued this week by the Norwegian Shipowners’ Mutual War Risks Insurance Association (DNK) concluded that the attack was likely to have been carried out by a surface vessel operating close by that despatched underwater drones carrying 30-50 kg (65-110 lb) of high-grade explosives to detonate on impact.

The attacks took place against a backdrop of U.S.-Iranian tension following Washington’s decision this month to try to cut Tehran’s oil exports to zero and beef up its military presence in the Gulf in response to what it called Iranian threats.

The DNK based its assessment that the IRGC was likely to have orchestrated the attacks on a number of factors, including:

- A high likelihood that the IRGC had previously supplied its allies, the Houthi militia fighting a Saudi-backed government in Yemen, with explosive-laden surface drone boats capable of homing in on GPS navigational positions for accuracy.

- The similarity of shrapnel found on the Norwegian tanker to shrapnel from drone boats used off Yemen by Houthis, even though the craft previously used by the Houthis were surface boats rather than the underwater drones likely to have been deployed in Fujairah.

- The fact that Iran and particularly the IRGC had recently threatened to use military force and that, against a militarily stronger foe, they were highly likely to choose “asymmetric measures with plausible deniability”. DNK noted that the Fujairah attack had caused “relatively limited damage” and had been carried out at a time when U.S. Navy ships were still en route to the Gulf.

Both the Saudi-flagged crude oil tanker Amjad and the UAE-flagged bunker vessel A.Michel sustained damage in the area of their engine rooms, while the Saudi tanker Al Marzoqah was damaged in the aft section and the Norwegian tanker Andrea Victory suffered extensive damage to the stern, DNK said.

The DNK report said the attacks had been carried out between six and 10 nautical miles off Fujairah, which lies close to the Strait of Hormuz.

Iran has in the past threatened to block all exports through the Strait of Hormuz, through which an estimated fifth of the world’s oil passes.
According to DNK, it was highly likely that the attacks had been intended to send a message to the United States and its allies that Iran did not need to block the Strait to disrupt freedom of navigation in the region.

Iranian officials and the Revolutionary Guards’ (IRGC) spokesman were not available for comment.

Tehran had already rejected allegations of involvement and Iranian Foreign Minister Mohammad Javad Zarif had said that “extremist individuals” in the U.S. government were pursuing dangerous policies. No one claimed responsibility for the attacks.

DNK’s managing director Svein Ringbakken declined to comment, except to say that “this is an internal and confidential report produced to inform shipowner members of the DNK about the incidents in Fujairah and the most likely explanation”.
The UAE has not blamed anyone for the attack.

In a joint letter seen by Reuters and sent to the U.N. Security Council on Wednesday, the UAE, Saudi Arabia and Norway said the attacks had been deliberate and could have resulted in casualties, spillages of oil or harmful chemicals.

“The attacks damaged the hulls of at least three of the vessels, threatened the safety and lives of those on board, and could have led to an environmental disaster,” the letter said.

Last month, the United States designated the entire IRGC as a terrorist organization. Washington had previously designated entities and individuals connected with the IRGC, which controls vast segments of Iran’s economy.