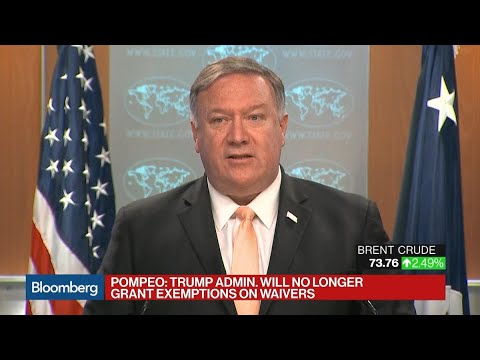 
On 22nd April, the US announced that it would not extend the Iran sanctions waivers on certain countries, which were due to expire on 2nd May.
The Trump administration’s objective is to force Iranian crude oil and condensate exports down to zero.
Iran is not only an exporter of crude oil but also a significant source of condensates, especially for Asian buyers.
Last November, when the sanctions were due to go into effect, the US unexpectedly granted waivers to eight Iranian crude and condensate importers until May, 2019, Poten & Partners explained in a comment piece.
As other oil producers had already raised production in anticipation of Iranian exports cut-off, the crude market became over-supplied and Brent prices dropped from the mid-$70’s per barrel at the end of October, 2018 to around $60 in January.
Due to the price decline, last December, OPEC decided to cut production again by 1.2 mill barrels per day to support prices. These production cuts quickly translated to lower shipping rates as Middle East exports fell.
The question now is - what impact will the stricter Iran export sanctions have on the tanker market?
Based on AIS data on tanker loadings, it is estimated that Iran loaded about 1.6 mill barrels per day in March, a significant increase from December, when only 0.6 mill barrels per day was loaded, Poten said.
It is unclear as yet how the main importers of Iranian crude will react. South European buyers with waivers had already cut imports but China, South Korea, Turkey, India and Japan were still importing Iranian crude this year.
Japan will likely stop lifting cargoes and it is generally expected that South Korea will follow, however, they have to find suitable alternative sources of crude oil and condensates.
Turkey and China’s reaction is less clear. Both countries reportedly voiced opposition to the sanctions. India, which has reduced shipments since the sanctions were introduced will probably cut volumes further, but it may seek further waivers.
It is possible that India will continue to import some Iranian crude, especially since the US has also imposed sanctions on Venezuela, another one of India’s key crude oil suppliers.
Despite Turkish opposition to the US sanctions, it is generally expected that the country’s refiners will comply. Saudi Arabia and UAE have announced that they will ensure that the oil market remains well supplied. However, this might mean that they must exceed their quota under the OPEC production cut agreement.
The Trump administration is trying to balance rising oil prices, which hurt US consumers, with the object of affecting policy changes in Iran and Venezuela. Rising instability in Libya could also impact oil supply, reduce spare capacity and put upward pressure on prices.
Due to the sanctions, it is difficult for most regular shipowners to carry Iranian crude or to load in Iran. Generally, insurance companies won’t allow owners to carry such cargoes, as that could result in exposure to sanctions from the US. Therefore, the vast majority of Iranian crude is moved on Iranian controlled tonnage. These vessels will most likely be used for storage when not used for exports, as they cannot be used for regular international trading.
Iran owns 37 VLCCs, of which 10 are currently used for storage, nine Suezmaxes and six Aframaxes.
If Iranian crude is replaced by Saudi Arabian and the UAE crude, the tonne/mile demand impact will be limited. However, if the Iranian fleet is not able to operate, this would result in an effective reduction of the VLCC fleet by about 3.5%, which will be positive for the tanker market, Poten concluded.
Posted by Crude Oil Daily at 11:48 AM