Kinder Morgan Inc. Starts 2018 Off With a Bang


As promised, natural gas pipeline giant Kinder Morgan (NYSE: KMI) returned to growth mode in 2018. Overall, the company hauled in $1.247 billion ($0.56 per share) of distributable cash flow during the first quarter, which was 3% higher than the year-ago period, and beat its forecast.

Those strong results, when combined with an improving financial profile, enabled Kinder Morgan to follow through with its promise to boost its dividend by 60% this year. 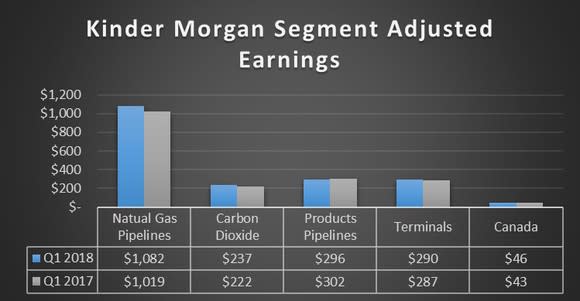 What happened with Kinder Morgan this quarter? 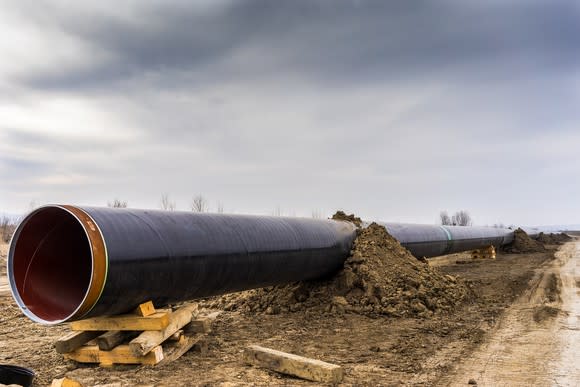 What management had to say

CEO Steve Kean commented on the quarter and the company's progress:

One of the strengths of this company is strategically positioned fee-based assets that generate predictable cash flows, and this quarter once again demonstrated that strength. Several business units achieved strong financial performance in the first quarter and are poised to continue that success through the remainder of the year. During the first quarter, we made substantial progress on the Elba Liquefaction Project and began work on the Gulf Coast Express Project. We had very good commercial and operating performance, exceeding our plan for the quarter.

Overall, Kinder Morgan generated $804 million in excess cash above what it will pay out via its increased dividend for the quarter. The company used that money to fund projects like Elba and the Gulf Coast Express and still had enough left over to buy back another $250 million in shares, adding to the $250 million it spent last December.

In addition to making progress on those two key growth projects, Kinder Morgan completed work on about $700 million of expansions during the quarter. The company quickly replenished its backlog by adding $900 million of new high-return projects to the fold. Because of that, it now plans to spend about $100 million more this year, bringing its capital budget up to $2.3 billion. However, its financial plan included more than $500 million of unallocated cash flow, giving it the flexibility to invest that money into new projects like those it recently secured as well as repurchase shares.

Thanks to that strong quarter, Kinder Morgan remains on pace to meet or exceed its target for both distributable cash flow ($4.57 billion or $2.05 per share) and leverage (5.1 times debt to EBITDA) for 2018.

While its outlook for 2018 looks positive, though, its future growth prospects dimmed significantly earlier this month when Kinder Morgan Canada threatened to abandon the Trans Mountain Pipeline expansion. The company gave a tight deadline of the end of next month to gain the clarity and protection it needs to move forward. Kean went so far as to say on the quarterly conference call that "it has become clear this particular investment may be untenable for a private party to undertake. The events of the last 10 days have confirmed those views." Consequently, the company could abandon the project or potentially sell it to the federal government and Alberta, which both deem it as a vitally strategic one for the country and the oil sands region. Given the overhang of this uncertainty, shares of Kinder Morgan could be quite volatile until it finally has a firm outcome for this project.