Stop Trying to Guess When OPEC Will Hit Its Target 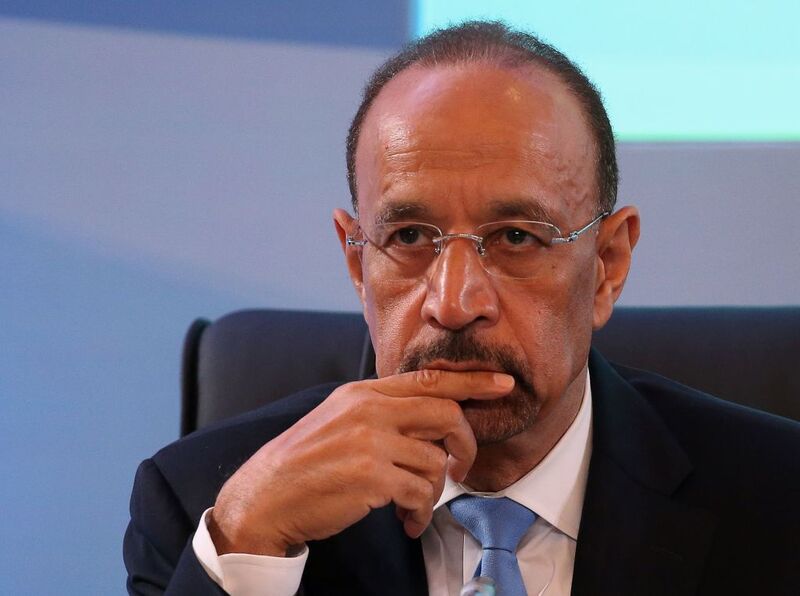 
When will OPEC finally succeed in rebalancing the oil market? The second quarter? The fall? Next year?

As you ponder this question, keep this in mind: OPEC has moved on already.

Speaking Tuesday on the sidelines of the World Economic Forum in Davos, Saudi Arabia's energy minister, Khalid Al-Falih, said OPEC needed to extend its cooperation with several non-OPEC producers on managing supply "beyond the current agreement." As for Saudi Arabia's recently established alliance with Russia, Al-Falih sees this lasting "decades and generations."

Al-Falih was echoing comments he made last weekend in Muscat, when -- apart from urging members of the so-called Vienna Group of OPEC and non-OPEC members to consider cooperating beyond this year -- he also raised questions about the target they should be pursuing. Right now, it's the five-year average of commercial oil inventories in the OECD. But, as he said, that's a dynamic target influenced by the very glut OPEC seeks to eliminate (something I pointed out here). He held out the possibility that any extended agreement might target different levels of production or inventories.

The original six-month agreement announced in November 2016 has now been running for more than a year and was extended recently to the end of 2018. Now, though, there appears to be a new timescale: forever.

The reason for this was, coincidentally, laid out in a report published earlier this month by the Oxford Institute for Energy Studies and authored by Spencer Dale, chief economist at BP Plc, and Bassam Fattouh, a director at the OIES. They argue the current craze for timing the peak of global oil demand misses the point because, even after this happens, demand will likely fall slowly and the world will still require millions of barrels a day for a long time to come.

Rather, they argue that the prospect of peak demand reflects a shift from an era of scarcity -- "peak supply" was the dominant view only a decade ago -- to one of relative abundance as resources such as U.S. tight oil have entered the market. Abundance of anything usually means heightened competition for market share, and oil is no different. However, there's a catch.

Several of the world's largest producers of oil, such as Saudi Arabia, cannot embrace such a competitive paradigm fully. Although they can produce oil from their fields for maybe $10 to $20 a barrel -- far below current prices around $70 -- they cannot sustain their oil-rent-reliant societies for that price.
This is why Saudi Arabia is belatedly trying to refashion itself as a diversified economy. Yet this is a long and risky process. So, in the meantime, they will do what they can to keep oil prices high enough to cover the "social costs" of being a petrostate, rather than simply compete for market share. As Dale and Fattouh wrote:

It is likely that many low-cost producers will delay adopting a more competitive strategy until they have made significant progress in reforming their economies. This is likely to slow the speed at which the new competitive oil market emerges.

My quibble with this point is that, while OPEC members will likely continue to fight against the competitive trend, it is doubtful they can actually do this sustainably.

Clearly, they've had some success over the past six months. Consider what that has taken, though. First, OPEC couldn't do it alone; they had to rope in 11 other countries, including Russia. Second, as I wrote here, a large share of the supply cuts delivered so far are due to some countries, such as Venezuela, "over-delivering," to use Al-Falih's uncomfortable euphemism. These, along with OPEC's thinly veiled appeals to U.S. shale operators to just dial it back already, are admissions of weakness rather than boasts of strength.

The history of restrictive commodity agreements like OPEC's is largely one of failure, punctuated by the occasional ability to keep prices far above their marginal cost of production for several years. Keeping prices high encourages rival supplies into the market (see the North Sea in the 1970s and U.S. tight oil this past decade) and discourages demand (see fuel-economy standards and nuclear power in the 1970s and the push toward vehicle electrification now). It's also hard to prevent cheating on supply quotas the longer they remain and prices and circumstances change. On hearing Al-Falih's comment about the alliance with Russia lasting "generations," my first thought was that Russia in its present form has barely existed for one generation.

In the old days, an OPEC supply cut could keep prices high for years until supply and demand responded to take them back. Nowadays, shale producers rush to hedge when oil rises above $50 a barrel, and thereby raise their output. Demand, meanwhile, responds not just with knee-jerk reactions like recessions but a gathering, structural change in the technology of mobility that doesn't stop if prices fall again.

Saudi Arabia, like several of its fellow OPEC members, feels compelled by its vulnerable economic model to resist embracing a truly competitive oil market and keep trying to manage the market well beyond 2018. Yet the weaknesses of this approach are apparent already.

Looking ahead, another sustained upswing in oil prices may well result less from some coordinated effort but instead the chaotic removal of supply as some weaker petrostates undergo wrenching changes à la Venezuela. The reality is that the self-appointed guardians of "balance" in the oil market constitute the very fragility lying at the heart of it.
Posted by Crude Oil Daily at 12:05 PM