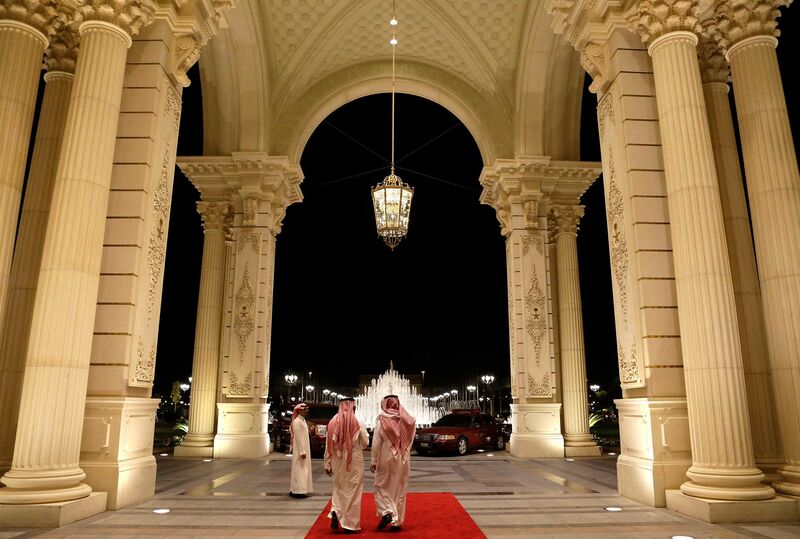 
Around midnight on Jan. 21, the Ritz-Carlton in Riyadh hardly looks like the holding pen for some of Saudi Arabia’s most wanted. Since November, some of the kingdom’s richest princes, cabinet officials, and businessmen have been detained in the palatial five-star hotel as part of a sweeping anticorruption purge. There are no armed guards visible; only one police car is seen outside the compound. In the well-lit lobby, with Arabic music playing over speakers, government staffers are scattered around cafe tables. There’s a buffet, but nobody is eating.

On a couch near the reception desk, Sheikh Saud Al Mojeb, the Saudi attorney general, does a head count of detainees. So far, about 90 have been released, having reached settlement deals with the government. Fewer than 100 remain, including five who are weighing proposed deals. Those who don’t reach an agreement will be referred to prosecutors. “The royal order was clear,” Al Mojeb says. “Those who express remorse and agree to settle will have any criminal proceedings against them dropped.”

The Saudi detention plan is winding down, with authorities expecting the Ritz to be cleared of detainees by the end of January. The government sees it as a resounding success. One senior official believes it will net more than $100 billion in settlement deals. That money could be a shot in the arm for the Saudi economy, still struggling to recover from the 2014 drop in oil prices. The payments have been a combination of cash, real estate, stocks, and other assets and will likely be managed by a government committee, according to the official.
The purge, led by Crown Prince Mohammed bin Salman, the 32-year-old son of King Salman, began without notice on Nov. 4, as authorities swept across the country rounding up hundreds of suspects, including some of the most prominent citizens. Prince Alwaleed bin Talal, considered the richest man in Saudi Arabia, was detained, as was former Finance Minister Ibrahim Al-Assaf and Adel Al Fakeih, who was removed as minister of economy and planning on the eve of the arrests. Prince Miteb, son of the late King Abdullah and minister of the powerful National Guard, was held and then released a few weeks later after agreeing to pay more than $1 billion.

News of the purge reverberated across boardrooms, financial markets, and world capitals as bankers, analysts, and diplomats sought to assess its impact on the biggest Arab economy. Stocks in companies owned by detainees slumped. Although Saudi Arabia is trying to become more open, the probe was conducted in a “pretty nontransparent way,” Moritz Kraemer, global chief rating officer at S&P Global Ratings, said in a Jan. 22 interview on Bloomberg Television. The probe “could be a step in the right direction, but it could also be a step towards more arbitrary ruling,” he said.

Saudi officials say Prince Mohammed had to tackle graft as he tries to revitalize the economy by weaning it off oil. “Corruption had reached epidemic proportions,” says the senior official. “It was as if the nation woke up and realized there was good news and bad news: The bad news was that it had cancer. The good news was that it’s treatable, but we have to go through surgery, chemotherapy, radiation, and amputation.”

One of the biggest mysteries is the fate of Alwaleed. Three people following his case say he’s left the Ritz and wasn’t in prison—rather, he was held at another location as he negotiates an agreement. Three others, however, say he’s still at the hotel. In December two people with knowledge of the matter said Alwaleed was balking at steep financial demands that would force him to give up control of his $9 billion holding company.

Bloomberg was unable to meet with detainees or to verify the attorney general’s claims that all of them were allowed access to legal counsel. Two people who’ve spoken to some of them say not everyone was given access to lawyers or let out of their rooms except for questioning. Al Mojeb denies the suspects’ rights were violated and says the antigraft committee wants to exhaust all options that can lead to a settlement before referring anyone to prosecution. Still, the message is clear. “We are in a new era,” Al Mojeb says. “The campaign against corruption won’t stop.”
Posted by Crude Oil Daily at 3:07 PM