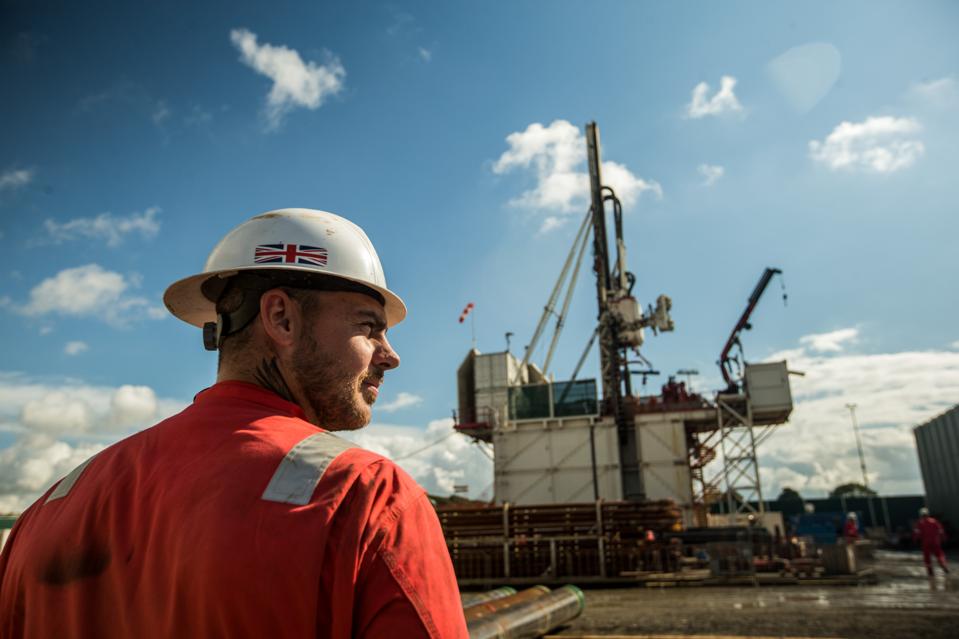 A worker, wearing a hardhat featuring a Union Flag, also known as a Union Jack, stands near the drill rig at the Preston New Road pilot gas well site, operated by Cuadrilla Resources Ltd., near Blackpool, U.K., on Tuesday, Sept. 19, 2017. Cuadrilla started drilling the pilot well that is expected to reach depth of 3,500 meters, a core sample will be taken from the well and examined to determine where to drill the horizontal well it intends to frack. Photographer: Matthew Lloyd/Bloomberg

As the rally in oil prices gathers steam, it's important to place the quoted prices in context.  The price most frequently quoted for "crude oil" is the front-month West Texas Intermediate contract.  So, today's oil price of "$52 per barrel" is the value of the contract for delivery at the hub in Cushing, OK by November 30th, a contract that settles on October 20th. The lag between the settlement date and the delivery date represents the necessity to transport the physical commodity.

So, there's really no "spot" price for crude in the Western world, as it doesn't settle on a day of/cash basis.  U.S. oil producers are compensated for their output based on the value of the futures contract for the month corresponding to the delivery of the oil.  Of course those producers use futures along the forward curve to hedge production in upcoming periods.

That type of market doesn't necessarily exist around the world.  Saudi Arabia, for instance, sells its crude to China on a price that it sets monthly with an eye on oil futures, specifically for Brent crude. Other, less-developed oil nations sell at prices that more closely resemble a true spot market price.

This has given rise to a theory, propagated most widely by Goldman Sachs, that OPEC is trying to engineer backwardation, a situation in which future month oil contracts trade at lower values than current ones.  In the past week's rally the oil futures curve has indeed moved into backwardation, albeit slightly so, as the October 2018 contract is trading 17 cents below the November 2017 contract as of this writing.  As oil is physical commodity that has a storage cost, the curve is usually upward-sloping  (a situation known as contango) and as U.S producers hedge future production based on the curve, lower future prices hurt hedgers more than those who sell in the spot market.

One might wonder if September's move in oil futures is a product of a Saudi-led drive to restrain U.S. oil production by getting American producers to lock in future production prices at lower prices than current ones.  Goldman has been pushing this theory, but as I noted in this column, I often take the other side of Goldman's commodity calls.  My move into extremely bullish positions on stocks of oil producers at the end of August was at odds with Goldman's Post-Harvey analysis and has been a very lucrative one for my clients.


Quite simply, oil prices are rising because demand is increasing.  Commodities analysts can navel-gaze about the shape of the forward curve ad nauseum, but those same analysts have consistently underestimated demand for oil and its refined products.   The International Energy Administration last week increased its global oil demand forecast for 2017 for the third time in three months.  It receives much less publicity, but this week's petroleum supply report from the U.S. Energy Information Administration showed motor gasoline product supplied rose 0.6% on a year-on-year basis  last week.  Product supplied is the closest indicator to actual U.S. gasoline consumption, and after running at or slightly below zero growth for much of 2017 that indicator has turned solidly positive in recent weeks.

So, the IEA confirms that growth outside the U.S. is rising and the EIA confirms that U.S. demand for petroleum products is rising.  That's bullish, and if traders haven't figured out that this demand increase is going to last more than a month or two eventually they will have to.  Then the oil markets will move back into contango, and there really is nothing stopping a move in U.S. crude to $60/barrel, a level nearly reached by international benchmark Brent crude this week.

I'll have stock plays for this rising environment in my next Forbes column.