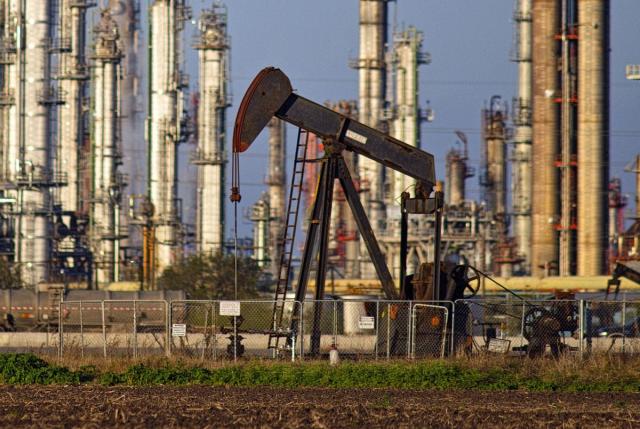 
Oil hit a wall again, failing to sustain a rally above $50 a barrel for a third straight session.

That’s partly because demand typically drops this time of year as many crude-processing plants shut down in the fall for maintenance. But it’s also because producers are coming to the futures market whenever West Texas Intermediate prices approach $50 to lock in profits. While that protects them against a slump, it also makes it more difficult for futures to rise further. Meanwhile, for the third time this month, a hurricane is heading toward the Caribbean.

“We are moving into the autumn period and that typically is a weaker period seasonally for oil demand,” Harry Tchilinguirian, head of commodity markets strategy at BNP Paribas SA in London, said by telephone. At the same time, “$50 is pretty much the magic number which oil producers come in and hedge. The price of WTI is up against a wall, a producer hedge wall, and it’s going to be difficult to overcome that.”
While oil’s peaks above $50 have so far failed to stick, futures have gained some strength after the Organization of Petroleum Exporting Countries and the International Energy Agency boosted their forecasts for global demand last week. In the U.S., shale producers are set to churn a record 6.08 million barrels a day in October, according to the Energy Information Administration.

WTI for October delivery rose 2 cents to settle at $49.91 a barrel on the New York Mercantile Exchange. Total volume traded was about 18 percent below the 100-day average.

Brent for November settlement fell 14 cents to end the session at $55.48 a barrel on the London-based ICE Futures Europe exchange. The global benchmark crude traded at a premium of $5.13 to November WTI.

“We’re going to see some recovery in Texas but we’re also going to see some reductions in refining activity in the rest of the country,” Bill O’Grady, chief market strategist at Confluence Investment Management in St. Louis, said by telephone. “Demand for crude will probably stay pretty weak.”

Hurricane Maria intensified into a major hurricane on Monday and is expected to continue strengthening as it closes in on the Leeward Islands, the National Hurricane Center said in an advisory. Maximum sustained winds approached 125 miles (201 kilometers) an hour, and Maria is not forecast to weaken as she rakes islands already devastated by Irma.

Puma Energy plans to shut its petroleum terminal in St. Thomas, U.S. Virgin Islands ahead of Hurricane Maria, according to the company. Ports in Puerto Rico and the U.S. Virgin Islands are scheduled to shut Tuesday in preparation for the hurricane, according to the U.S. Coast Guard.
Oil-market news:
— With assistance by Ben Sharples, and Grant Smith
Posted by Crude Oil Daily at 5:11 PM