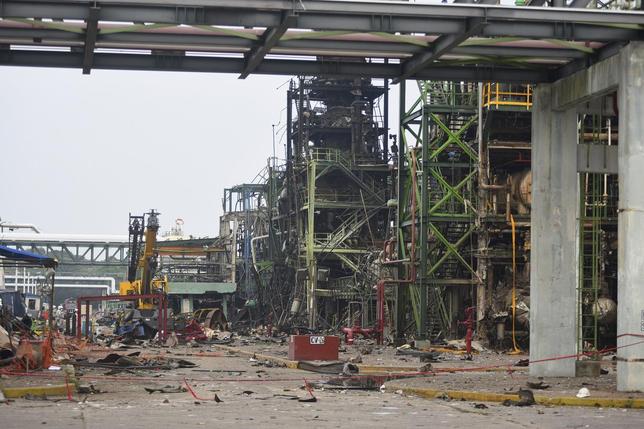 Mexican state oil giant Pemex said on Friday that the death toll from a petrochemical plant blast in the southeastern oil hub of Coatzacoalcos had risen to 28, in the latest fatal accident to befall the beleaguered company.

In a statement, Pemex said it had identified 25 bodies and that three more were still unidentified. It added that 18 people remained hospitalized. Pemex has said the accident was caused by a leak, but has not fully explained what happened.

The oil firm said it would continue to scour the blast site, but that progress was slow, given the scale of the damage.

The massive explosion took place on Wednesday afternoon at the facility's chlorinate 3 plant in the Gulf state of Veracruz, sending a black cloud of smoke hundreds of meters into the air and giving off a powerful smell of ammonia.

The blast occurred at a vinyl petrochemical plant that is a joint venture between Pemex's petrochemical unit and majority owner Mexican plastic pipe maker Mexichem. Pemex operates the larger petrochemical complex where the plant was located, known as Pajaritos.

The plant produces some 900 tons a day of vinyl chloride monomer, also known as chloroethene, an industrial chemical used to produce plastic piping. The joint venture had forecast sales of $260 million this year.

Earlier on Friday, Mexichem Chief Executive Officer Antonio Carrillo told Reuters that the company had declared force majeure on one internal contract in the wake of the blast.

He said Mexichem would have a better idea of the impact of the blast on the company in the coming weeks.

In February, a fire killed a worker at the same plant, the latest in a litany of safety disasters that have plagued Pemex.

In 2013, at least 37 people were killed by a blast at its Mexico City headquarters, and 26 people died in a fire at a Pemex natural gas facility in northern Mexico in September 2012.

A 2015 fire at its Abkatun Permanente platform in the oil-rich Bay of Campeche affected oil output and cost the company up to $780 million.

(Reporting by Gabriel Stargardter and Lizbeth Diaz; Editing by Tom Hogue)
Posted by Crude Oil Daily at 10:24 AM