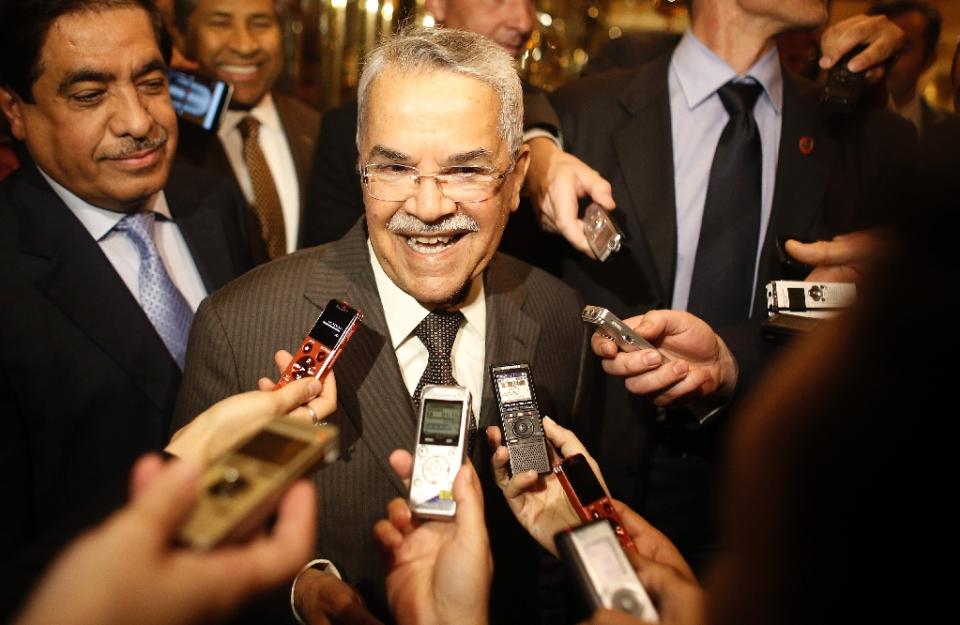 OPEC's strategy of not cutting production in order to maintain market share is working, Saudi Arabia's oil minister Ali al-Naimi said as he arrived for a meeting of the cartel to decide on output levels (AFP Photo/Dieter Nagl)

Vienna (AFP) - OPEC's strategy of not cutting production in order to maintain market share is working, Saudi Arabia's oil minister said Monday as he arrived for a meeting of the cartel to decide on output levels.

Asked if this strategy pushed by OPEC kingpin Saudi Arabia was working, Ali al-Naimi told reporters in Vienna: "The answer is yes... Demand is picking up. Supply is slowing. This is a fact. The market is stabilising."
"You can see that I am not stressed, that I am happy," he said.

The 12-nation OPEC cartel, pumping some 30 percent of the world's oil, is expected on Friday to maintain its official production target of 30 million barrels per day (bpd).

Gulf members, led by Saudi Arabia, will probably resist calls to cut output as they seek to safeguard their share of a market that is plagued by a vast supply glut -- fuelled partly by the boom in shale oil.
"OPEC is likely to confirm its output target of 30 million barrels per day given that its strategy of defending market shares is bearing fruit," said Commerzbank analyst Carsten Fritsch.

"The rapid rise in US crude oil production has been stopped and the oil price has recovered considerably since February."

Naimi on Monday however refused to be drawn on what the outcome of Friday's meeting would be, saying: "We haven't even met yet... I am willing to discuss with everybody."

OPEC refused in November to cut its official daily oil output target of 30 million barrels -- where it has stood for more than three and a half years -- despite the glut. 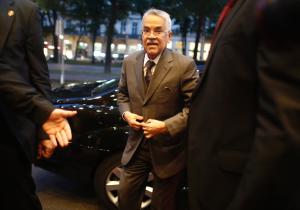 The move, which sent prices sliding further, was widely regarded as a tactical attempt to boost demand and hurt non-OPEC output, particularly US shale producers which have higher costs.
In recent weeks, oil prices have fought back after the market plunged 60 percent between June and January on the back of abundant supplies.

While higher prices boost producers' revenues they can also weigh on demand -- and in turn economic growth -- harming the cartel in the long run.

However, faced with a precipitous slump in their earnings, some OPEC members -- led by Iran and Venezuela -- have publicly urged the cartel to cut production to support prices.

But Saudi Arabia appears determined to pursue its strategy.

"When OPEC decided not to cut output in November, Saudi Arabia outlined its strategy to moderate runaway growth from high-cost non-OPEC suppliers, as well as stimulate global oil demand. The kingdom seems to be on track to achieve these goals," noted Barclays analysts.

The oil market meanwhile remains well down from year-earlier levels.

Oil prices have lost almost half their value since June 2014, when Brent traded at about $115 and New York crude at almost $108 per barrel.

Experts at consultancy Energy Aspects say that the current level of $60 per barrel is causing "ample damage" to non-OPEC supplies outside of the United States.

And in reaction to the price collapse, major oil companies have slashed their exploration budgets and massively reduced their capital expenditure.

Actual OPEC production stood at 31.21 mbpd in April, the highest level since September 2012, according to recent data from the International Energy Agency.

In Monday morning trade, the oil market slid on renewed supply glut concerns ahead of the OPEC gathering.