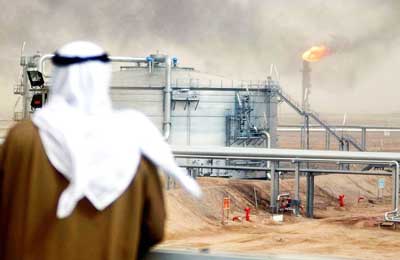 The crude oil production from the Organization of Petroleum Exporting Countries (Opec) increased to 31.11 million barrels per day (bpd) in May, up 180,000 bpd from the previous month, said a new report.

This was the group's highest monthly volume since October 2012, according to the latest Platts survey of Opec and oil industry officials and analysts.

"Opec's communique after the June 5 meeting mentioned that members had been urged to adhere to its production ceiling," said Margaret McQuaile, senior correspondent for Platts, a leading global provider of energy and commodities information.

"That's something of a tall order, given that there are no quotas and that the 30 million bpd ceiling is supposed to cover production from Iraq, which hasn't been part of Opec's production management system for years. With market share now pretty much the main theme - for the bigger players, at least - it seems likely that, for the time being, the only cuts in output will be involuntary ones," he noted.

In terms of production increases in May, Saudi Arabia led the upward charge with a 150,000-bpd increase to 10.25 million bpd, while Angola and Iraq boosted output by 70,000 bpd and 50,000 bpd, respectively. Smaller increments came from Angola, Algeria, the United Arab Emirates (UAE) and Venezuela.

Saudi Arabia looks set to keep output high in the near term. Arriving in Vienna last week for Opec talks, Saudi oil minister Ali Naimi said the kingdom's market share policy was working, with oil demand picking up and supply slowing. However, he said, although world oil markets are stabilizing a rebalancing will take time.

Angolan production recovered after a dip in April that was linked largely to problems at the Plutonio field that have since been resolved. There was also a short force majeure on liftings of Saturno between late April and early May.

The government has been striving to maximize output levels but has been struggling with technical problems that have affected production in recent months. The force majeure on Saturno was the second in two months. In Vienna, Angolan oil minister Jose Maria Botelho de Vasconcelos estimated current output at 1.79 million bpd.

Despite ongoing political and infrastructural challenges, Iraq has continued to push out more oil, partly thanks to higher output from the south and partly to a deal with semi-autonomous Kurdistan late last year that has enabled Baghdad to resume exports from Turkish Mediterranean port Ceyhan via the Kurdistan Regional Government's pipeline system.

Output from the Wafra field in the Neutral Zone between Saudi Arabia and Kuwait remains shut in after a maintenance program that operator Chevron said on May 11 would take two weeks.

Another Neutral Zone field, Khafji, has been shut in since October last year. Kuwait said at the time that the field had been shut by Saudi Arabia for "technical reasons," but analysts said they believed Riyadh's decision to close Khafji signaled deeper problems between the two countries.

Libyan production continues to be defined by large swings up and down as the country's situation remains mired in political chaos. After several months of increases, Libyan production went back into reverse with a 90,000 bpd drop to 430,000 bpd.

The May estimate leaves Opec pumping more than 1 million bpd in excess of the 30 million bpd ceiling that ministers rubber-stamped on June 5 in Vienna and some 1.8 million bpd above the 29.3 million bpd that Opec sees as the call on its crude this year.

Earlier this week, Opec said in a regular monthly report that it expected the current oversupply on world oil markets to ease in the months ahead, with world oil demand picking up pace in the second half of the year and non-Opec supply showing a decline.

Opec's 30 million bpd ceiling has been in place since January 2012. It does not include individual country quotas.-TradeArabia News Service
Posted by Crude Oil Daily at 12:22 PM