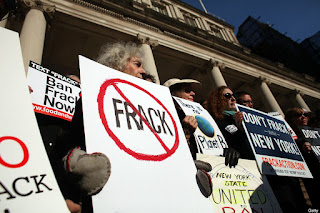 The signers include Binghamton Mayor Matthew Ryan. They're asking the donors to tell Cuomo to ban fracking until issues including disposal of drilling wastewater and potential health impacts are fully addressed.

The Department of Environmental Conservation is expected to complete a massive environmental review and new regulations within months.
Posted by Crude Oil Daily at 9:24 AM