Exxon Valdez Dismantled for Scrap. The notorious tanker was involved in one of the largest oil spills in U.S. history. 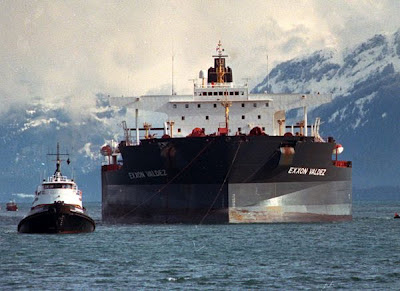 Last month, reports Shanta barley in Nature, the Indian Supreme Court ruled that the ore carrier Oriental Nicety could be beached and dismantled for scrap in the Indian port of Alang, the world's largest scrap metal yard.

The Valdez might have undergone, as do most of the world's merchant ships, a relatively anonymous existence were it not for the events of shortly after midnight on March 24, 1989. A few hours previously, the ship had steamed out of port in Valdez, Alaska, where it had loaded oil that had been transported from the North Slope via the Trans-Alaska Pipeline.

As the captain, who reportedly had been drinking ashore, slept in his cabin, the Third Mate, attempting to maneuever clear of icebergs calved by the nearby Columbia Glacier, drove the ship into Bligh Reef, ripping a hole in its hull and beginning what was, until the Deepwater Horizon disaster, the largest oil spill in United States history.

Officially, some 11 million gallons of crude oil spilled from the Exxon Valdez into the waters of Prince William Sounds, coating the sound's rocky coasts and inlets, taking the lives of as many as 250,000 seabirds and 2,800 sea otters, among other wildlife, and setting in motion longer-term environmental, economic, social and political consequences that continue to this day.

In 2008, the Exxon subsidiary that now owned the vessel sold it to a Hong Kong-based shipping company, Hong Kong Bloom Shipping, which converted it to an ore carrier and renamed it Dong Fang Ocean.

But controversy and collision were never to escape the former Exxon Valdez. In November 2010, the Dong Fang Ocean collided with the cargo ship Aali in the South China Sea, damaging both. In March 2012, Hong Kong Bloom Shipping sold it for scrap, until, now renamed the Oriental Nicety and under the ownership of Priya Blue Industries, it headed for Alang. But an Indian environmental group argued that the ship was in contravention of an international treaty because it contained asbestos and polychlorinated biphenyls.

The Indian Supreme Court prevented the ship from being beached until it had been inspected, during which time it floated off Mumbai, its final crew awaiting a decision on the vessel's fate.

On June 30, a team of six government officials came on board and stated that in their opinion the ship was clean; one month later, the Supreme Court directed "the concerned authorities to allow the ship in question to beach and to permit the ship owner to proceed with the dismantling of the ship."

Even now, there would be one final problem, the ship's anchor becoming stuck in the mud just two miles offshore.

Finally, on the afternoon of August 2, the former Exxon Valdez rumbled on to the recycling beach at Anang, taking up position behind two chemical tankers. The ship will never have another crew, will never set sail gain; its present resting place is its last, and soon all that will be left of it will be scraps of steel and a permanent place in infamy.
Posted by Crude Oil Daily at 1:40 PM