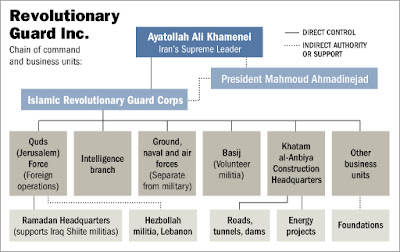 At a time when the world economy is teetering on the brink of collapse, there is alarming news that Iran is trying to get one of its top Revolutionary Guards commanders appointed president of Opec, the organisation that represents the world’s leading oil producing nations.
Rostam Ghasemi, the 61-year-old head of the Revolutionary Guards, has been nominated by President Mahmoud Ahmadinejad to become president of Opec. Under Opec’s rotating presidency system, Iran has held the presidency since last October. But Mr Ahmadinejad’s decision to nominate Mr Ghasemi, who is currently the subject of international sanctions for his links to Iran’s illegal programme, to take over the office of president should send shock waves throughout the global economy.

The appointment has yet to be approved by the Iranian parliament, but if it goes ahead the fate of world oil prices could rest in the hands of a man who has devoted his whole life to opposing the West. Oil prices are high enough as it is, and the prospect of Iran using oil prices to hold the world to ransom is something that should give all of us sleepless nights.
Posted by Crude Oil Daily at 11:32 AM