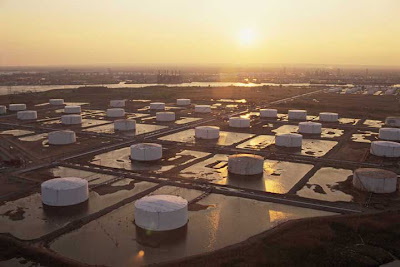 After oil prices surged past $100 a barrel in 2008, suspicions that traders had manipulated the market led to Congressional hearings and regulatory investigations. But they produced no solid cases in the record run-up in gasoline prices.

Ahmadinejad Backs Out of Key Role at OPEC (May 25, 2011) But on Tuesday, federal commodities regulators filed a civil lawsuit against two obscure traders in Australia and California and three American and international firms.

The suit says that in early 2008 they tried to hoard nearly two-thirds of the available supply of a crucial American market for crude oil, then abruptly dumped it and improperly pocketed $50 million.

The regulators from the Commodity Futures Trading Commission would not say whether the agency was conducting any other investigations into oil speculation. With oil prices climbing again this year, President Obama has asked Attorney General Eric H. Holder Jr. to set up a working group to look into fraud in oil and gas markets and “safeguard against unlawful consumer harm.”

If the United States proves the claims, the defendants may give up $50 million in profits that were believed to be made as a result of the manipulation and also pay a penalty of up to $150 million.

The commodities agency says the case involves a complex scheme that relied on the close relationship between physical oil prices and the prices of financial futures, which move in parallel.

In a matter of a few weeks in January 2008, the defendants built up large positions in the oil futures market on exchanges in New York and London, according to the suit, filed in the Federal Court in the Southern District of New York.

At the same time, they bought millions of barrels of physical crude oil at Cushing, Okla., one of the main delivery sites for West Texas Intermediate, the benchmark for American oil, the suit says. They bought the oil even though they had no commercial need for it, giving the market the impression of a shortage, the complaint says.

At one point they had such a dominant position that they owned about 4.6 million barrels of crude oil, estimating that this represented two-thirds of the seven million barrels of excess oil then available at Cushing, according to lawsuits.

This type of oil is also the main driver of prices of the futures contracts, and their actions caused futures prices to rise, the authorities say. “They wanted to lull market participants into believing that supply would remain tight,” the agency said. “They knew that as long as the market believed that supply was tight and getting even tighter, there would be upward pressure on the prices of W.T.I. for February delivery relative to March delivery, which was their goal.”

The traders in mid-January cashed out their futures position, and then a few days later began to bet on a decline in oil futures, with Mr. Wildgoose remarking in an e-mail about the “inevitable puking” of their position on an unsuspecting market, the federal lawsuit says.

In one day, Jan. 25, they then dumped most of their holdings of West Texas Intermediate oil, and profited by the drop in futures.

The traders repeated the buying and selling in March 2008, and were preparing to do it again in April but stopped when investigators contacted them for information, the suit says.

Between January and April, average gas prices rose roughly to $3.50 a gallon, from $3. It was not until later in 2008, after the defendants had ceased their reported actions, that oil prices soared higher — reaching $145 that July. By the end of the year, prices had fallen to about $44. The Texas oil is now around $100.

Many other factors were at work, including tight oil supplies in the Middle East and fears that a growing global economy would consume more oil. Yet the enforcement action by the commodities regulator was the first credible evidence that a small group of traders also played a role in manipulating prices.

“This will help to satisfy the desire to find a culprit and throw them under the wheels of justice,” said Michael Lynch, an oil market specialist at Strategic Energy and Economic Research, a consulting firm.

Calls to Arcadia Petroleum in London were not immediately returned. A person who answered the phone at Arcadia Energy in Switzerland said that he was unaware of the complaints and that Mr. Dyer and Mr. Wildgoose were on vacation and unavailable for comment.

In the last few years, the commission has settled a handful of cases of manipulation in the natural gas market.

In 2007, it settled charges for $1 million against the Marathon Petroleum Company for trying to manipulate West Texas Intermediate crude oil in 2003.

The agency brought an action similar to its latest case in 2008, asserting that Optiver Holding, a proprietary trading fund based in the Netherlands with a Chicago affiliate, used a trading program in 2007 to issue orders to manipulate the crude oil market. The case is pending. It involved claims of manipulation of futures contracts for light sweet crude, New York Harbor heating oil and New York Harbor gasoline.

A version of this article appeared in print on May 25, 2011, on page B1 of the New York edition with the headline: U.S. Suit Sees Manipulation Of Oil Trades.
Posted by Crude Oil Daily at 10:50 PM