Despite 29 fixtures for VLCCs being reported last week, a notable week-on-week increase and a further 30 Middle East cargoes expected to materialize in the coming weeks, shipbroker Charles R. Weber expects that they won’t be enough to cater for all the ships available, with 44 VLCCs ready to take on cargo. According to the shipbroker’s latest weekly report, “rates in the VLCC market continued to hover in the same range that has prevailed over the past month with participants unable to make a sufficiently strong argument to move rates concertedly in either direction. Supply/demand fundamentals, however, appear to have tightened following robust spot cargo coverage during the July Middle East program’s first two decades and a reduction of overall supply from floating storage, STS activities and units in dry dock – as well as sustained draws on Middle East availability to service West Africa demand”. 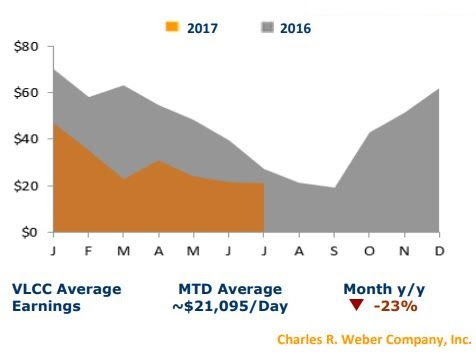 According to CR Weber, “the tightening is illustrated by a likely decline in surplus tonnage. With 98 Middle East cargoes covered to date, we anticipate a further 30 will materialize. Against this, there are 44 units available, from which draws for West Africa demand should account for six, implying an end‐ month surplus of just 8 units. This compares with 19 surplus units at mid‐July, illustrating the tighter fundamentals and suggesting forward rate strength. Complicating positive rate progression on this basis has been uncertainty over the precise number of remaining cargoes, with some participants suggesting a steep drop off in demand during July’s final decade – as well as the fact that disadvantaged units currently account for nearly a third of the total position list. However, small gains were realized at the close of the week and possibly reflect the reality of a tighter market, if still somewhat tenuous”. 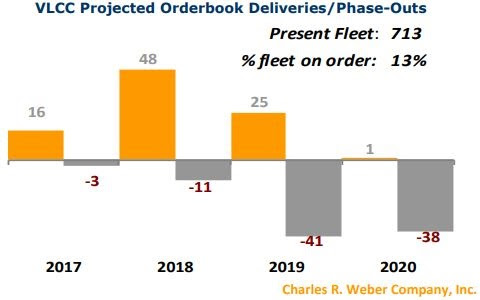 Meanwhile, CR Weber noted that “this week’s demand was relatively strong with 29 fixtures representing a 53% w/w gain and 9% more than the YTD average. In the West Africa market, the weekly tally rose by two to eight fixtures, or 19% more than the YTD average. During the upcoming week, the pace of demand in the Middle East should sustain as charterers cover remaining July cargoes, which could further expose the tighter fundamentals – provided the remaining cargo tally hold up to expectations – with the combination of tighter fundamentals and an active pace finally allowing owners to make command more meaningful rate gains. Rates on the AG‐JPN route gained one point to conclude at ws51. Corresponding TCEs rose by 6% to ~$21,657/day. Rates to the USG rose by one point to ws25. Triangulated Westbound trade earnings rose by 4% to ~$25,698/day”. 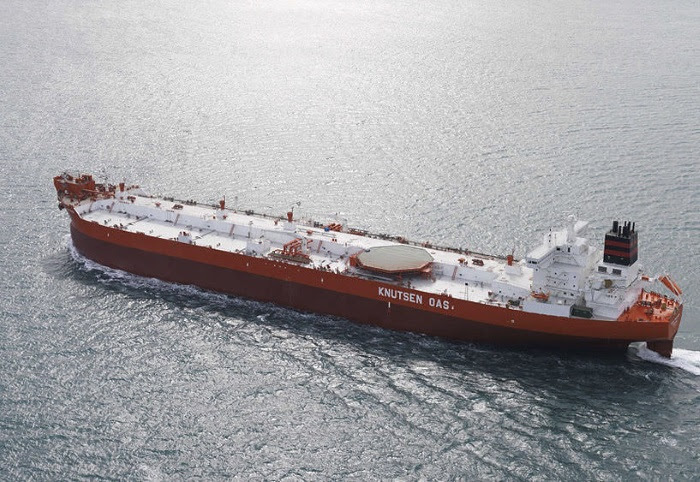 In the Atlantic Basin, rates in the West Africa market led those in the Middle East with the WAFR‐FEAST route gaining five points to conclude at ws60. “Corresponding TCEs jumped 18% to ~$27,116/day. Demand in the Caribbean market remained slow for a second consecutive week, leading rates to further modest erosion before overall VLCC market sentiment saw the losses regained. The CBS‐SPORE concluded unchanged, accordingly, at $3.50m lump sum”, said the shipbroker.

In the Suezmax market, CR Weber said that “the West Africa Suezmax market was modestly stronger this week thanks to rising West Africa crude exports that have sustained elevated demand. A total of 17 fixtures were reported this week, representing a 13% w/w gain. Meanwhile, the four‐week moving average of regional fixtures jumped to its highest level since 1Q16. Stronger rate gains, however, were complicated by ongoing high availability levels created by a 13% expansion of the global fleet since the start of 2016. Rates on the WAFR‐UKC route added five points to conclude at ws65 with corresponding TCEs rising by 42% w/w to ~$7,258/day. Though forward West Africa demand appears positive in light of strong West Africa exports and a Saudi OSP cut for Asian buyers which could keep VLCC demand in the West Africa market from rising, substantial rate gains could remain elusive. Seaborne crude exports from Russia have continued to decline, with those in the key Suezmax Black Sea market impacted by declining exports and pipeline maintenance at Primorsk. Thus, we see limited further rate upside potential in the near‐term”, the shipbroker concluded.