Oil market is about to get 'ugly' 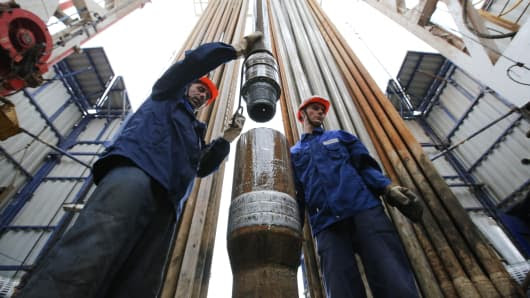 It was a rough week for the crude oil market.

After months of relative price stability, with WTI oil prices pinned between $50 and $55 per barrel, the floodgates of selling opened wide, as the record amount of long positions that was built up by speculators over the preceding weeks was, quite obviously, liquidated, as evidenced by sky-high volume in both futures and option contracts.

There were several catalysts: Crude oil inventories in the United States hit a new, record level, according the Department of Energy's weekly status report, which also showed U.S. oil production rebounding to within five percent of last year's record to nearly 9.1 million barrels per day.

Of course, the steadily rising oil rig count indicates that even more production is on the way, and it is not impossible to foresee overall production rising toward 10 million barrels per day over the course of the next 12 months.

There was also a large gathering of global energy interests in Houston, Texas this week that included officials from several OPEC countries and Russia.

Statements by Saudi Arabia's oil minister and OPEC's Secretary General were hardly reassuring about them continuing the current production limiting accord, after June 30, when it is set to expire.
The Saudi oil minister explicitly said that the accord adherents would not abide "free-riders," which is how he referenced the shale producers, in particular. Apparently, sideline discussions among this disparate group was even more pointed.

The production deal has been shouldered almost entirely by Saudi Arabia. If you take out their over-compliance, the OPEC compliance rate with the cutbacks is under 50%.

Up until this week, rosy rhetoric about limiting output from OPEC and Russia, among others, lifted prices and kept them elevated. At one point, a run at $60 per barrel looked possible, if not likely. Not anymore.

It is natural to think that the renewed sell-off would harden the resolve of producers to limit production, and restore the market balance, but that looks increasingly unlikely.

"Statements by Saudi Arabia's oil minister and OPEC's Secretary General were hardly reassuring about them continuing the current production limiting accord, after June 30, when it is set to expire."

Saudi Arabia's patience has been tried, and they have come to realize that their efforts have only served to resuscitate the U.S. shale competition, which is increasingly taking the battle for global market share to OPEC by ramping up exports that have at times exceeded 1 million barrels per day.
In response, Saudi Arabia announced that it would, once again, supply full contract volumes of crude oil to its Asian customers, and it has aggressively discounted its pricing.

In truth, the most effective strategy for Saudi Arabia, in terms of dealing with competitive threats, is to exploit its position as the low-cost producer (by a lot) and flood the market with oil.

The price crash last year was a result of unbridled production by OPEC members, when the quota system was scrapped. It sent a shudder through the energy market and wreaked havoc on the U.S. shale industry. The U.S. rig count fell by more than two-thirds from its 2015 peak, but has since recovered.

The Saudis have done this in the past. In 1998, they sought to teach Venezuela a lesson about competing for market share. They cratered prices, but not only did the kingdom squash Venezuela, U.S. oil production was gutted, and it did not recover, until the nearly decade long oil price close to $100 per barrel spurred the tight oil or fracking revolution and the ensuing rebound in output.

This could get ugly, again, for oil producers, especially if the OPEC-NOPEC production accord is scrapped.

With U.S. refiners undergoing seasonal maintenance right now, U.S. oil inventory levels will only grow further, until the units return to service, in the coming weeks.

Prices for WTI will likely fall steadily back to the November lows near $42 per barrel over the next few weeks.

The real test comes after that.

Could we retrace the entirety of the gains off the February 2016 low at $26.05? It is quite possible.
If the Saudis won't abide free-riders, then they need to act against them.

While it is painful to all concerned to undertake a price war, you can bet the lowest cost producers will be the last ones standing.

Commentary by John Kilduff, a partner at Again Capital, an investment-management firm that specializes in commodities. Follow him on Twitter @KilduffReport.
For the latest commentary on the markets in U.S. and around the world, follow @CNBCopinion on Twitter.
Posted by Crude Oil Daily at 3:40 PM