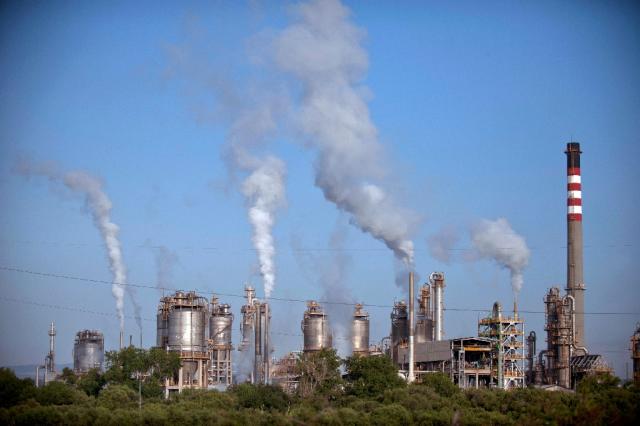 Paris (AFP) - Humans are disgorging heat-trapping carbon into the atmosphere 10 times faster than during any period of natural global warming in the last 66 million years, according to a study released Monday.

That rate far exceeds even a cataclysmic climate event 55.8 million years ago, and pushes humanity into unchartered and dangerous territory, researchers said.

With only 1C (1.8F) of warming so far, current climate change over the last two centuries -- mostly the last 50 years -- has already begun to unleash super-charged hurricanes, storm surges boosted by rising seas and devastating drought.

On present trajectories, greenhouse gas emissions will heat up Earth three to four degrees Celsius by 2100.

The PETM has been much scrutinised as a possible analog, or stand-in, for the potential impacts of carbon pollution.

"Of all the changes we have seen in 66 million years, this event is the one that most looks like anthropogenic, or man-made, warming," said Andy Ridgwell, a paleo-climatologist at the University of Bristol in England and a co-autor of the study.

Fifty-six million years ago, those extinctions took place mainly in the ocean. Today the so-called "sixth great extinction" is underway both in the sea and on land.

But up to now scientists couldn't figure out how quickly carbon -- whether in the form of CO2 or, more likely, methane from the ocean floor -- had been released.

"The biggest problem has been coming up with a firm timing for the PETM onset event," Ridgwell told AFP.

"How quickly the emissions occurred is absolutely critical."

Some studies had suggested the massive outpouring of carbon -- 2,000 to 4,500 billion tonnes -- took place in as little as a few hundred years.

This would be marginally reassuring in so far as humanity has added about 400 billion tonnes so far, and may be able to limit the total to two or three times that, depending on how quickly the world economy can kick its carbon habit.

In December, 195 nations set a target of capping warming "well below 2C," even if many scientists say we are likely to punch through this barrier.

But if the discharge of carbon 56 million years ago took place over a much longer period, that would suggest lower rates of emissions could still have dramatic consequences.

In a clever bit of chemical detective work, Ridgwell, James Zachos of the University of California at Santa Cruz, and lead author Richard Zeebe from the University of Hawaii figured out how to nail down the duration of the carbon release without having to determine when exactly when it happened.
Their findings were published in Nature Climate Change.

Knowing there is a lag between greenhouse gas emissions and temperature increase, they compared oxygen and carbon tracers, called isotopes, from ocean sediment off the coast of New Jersey.

"If the carbon was released rapidly we would find in the sediment core a lag with warming," Zeebe told AFP.
"If carbon is released slowly, the climate adjusts more or less in sync."

There was no lag at all. A quick calculation showed that the carbon could not have been emitted in less then 4,000 years, or about one billion tonnes per year.

By comparison, human activity -- industry, energy production, deforestation, agriculture -- is pumping out about 10 billion tonnes of carbon annually, 10 times as much.

"Aside from the huge impact that killed the dinosaurs, what we are seeing now is the fastest rate of climate change in 66 million years," said Ridgwell.

This is bad news for species loss, he continued.

"Ecosystem impacts tend to show up more with the rate, rather than the size, of the change in temperature," he said.

What is happening on Earth today, he noted, is closer in speed to the end of the Cretaceous -- when a comet cataclysm wiped out the dinosaurs -- than it is to events such as the PETM.

"We are in uncharted territory in the rate carbon is being released into the atmosphere and oceans," commented Candace Major, program director of the Division of Ocean Sciences at the US National Science Foundation, which funded the research.
Posted by Crude Oil Daily at 7:47 PM