http://www.cnbc.com/2015/12/23/oil-back-at-95--but-only-in-24-years-time-opec.html
Oil prices will take decades to recover and will still not reach the peak seen in recent years, according to the latest World Oil Outlook (WOO) from OPEC.
In the group's latest outlook on supply, demand and prices to 2020 and 2040, OPEC predicted that a barrel of oil would cost (in real terms) around $70 by 2020 and $95 by 2040, a far cry from a high point of $114 a barrel last seen in June 2014 before prices began to plunge on oversupply. On Wednesday, a barrel of benchmark Brent crude cost $36.51, a shade above WTI at $36.47.
Price declines were exacerbated by the decision last year by OPEC, the 12-member producer group led by Saudi Arabia, not to cut production. Still, OPEC's Secretary General Abdalla Salem El-Badri said OPEC had been a bastion of stability amid volatile times for the oil industry.
"The supply and demand balance in 2015 has been one of oversupply, with stock levels rising to well above the five-year average. Despite this market instability, OPEC has continued to be an efficient, reliable and economic supplier of oil," El-Badri noted in the foreword of report. 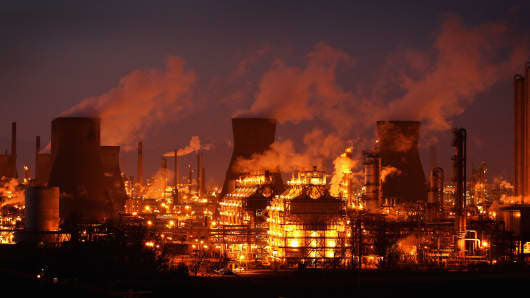 Jeff J Mitchell/Getty Images
An illuminated Grangemouth Oil Refinery emits smoke on March 29, 2012 in Grangemouth, Scotland.
While the oil price plunge has been largely down to an oversupply, demand for oil has been strong but just not strong enough. Looking at potential future demand in its outlook, OPEC predicted oil demand to rise to 97.4 million barrels per day (mb/d) by 2020, a slight rise of 500,000 barrels a day compared to last year's outlook.
By 2040, OPEC predicted overall demand to be close to 110 million barrels a day – a decline of around 1 mb/d on last year's forecast.

OPEC to mop up

OPEC's decision not to cut production in order to support prices was widely seen as a way for the group to retain its market share in the face of rivals, such as shale oil producers in the U.S. and Canada. The strategy has worked with many non-OPEC members, who tend to have higher production costs, struggling to break even.
As a result, many rivals have cut rigs and cancelled drilling projects while OPEC has continued to pump at record levels, often exceeding a self-imposed ceiling of 30 million barrels a day. OPEC has long predicted that the supply of oil from producers outside of the OPEC group would contract next year, just as world oil demand rises, and reiterated that prediction in the WOO.

OPEC predicts rivals' supply to contract in 2016
As non-OPEC supply faltered, OPEC would be there to meet demand, El- Badri said.
"From the supply perspective, in last year's WOO, non-OPEC liquids were expected to rise to 61.2 mb/d by 2020, whereas this year the number has dropped by 1million barrels a day to 60.2 mb/d. All this means that by 2020 the requirement for OPEC crude is anticipated to be at 30.7 mb/d, an increase of 1.7 mb/d from last year," El-Badri said.

As rivals cut back on rigs, drilling projects and investments, OPEC warned that it was important that the "necessary future investments are made" and said it would do so.
"If the right signals are not forthcoming, there is the possibility that the market could find that there is not enough new capacity and infrastructure in place to meet future rising demand levels, and this would obviously have a knock-on impact for prices," El-Badri noted in his foreword to the report.

Oil demand growth to slow but OPEC keeps pumping
OPEC signaled it was ready to invest in the "development of new upstream, capacity," which, El-Badri noted, underscored "OPEC's commitment to security of supply for consumers, which needs to go hand-in-hand with security of demand for producers."
The group yet again signaled that it is ready to mop up market share from its competitors – especially those cutting back on production – stating that the increase in the overall requirement for OPEC crude between 2015 and 2040 is almost 10 million barrels a day -- whereas for non-OPEC liquids it is just over 3 mb/d.
The forecast for demand had declined, however. "Overall demand by 2040 is at close to 110mb/d, around 1mb/d less than in last year's WOO. This is the result of further energy efficiency improvements, environmental policies, as well as slightly lower long-term economic growth estimates," OPEC's secretary general said.