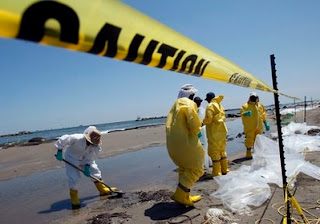 The barge was carrying 112,000 gallons of No. 6 fuel oil, but it was unclear how much oil spilled into the water, the U.S. Coast Guard said in a statement.

The spill came from a Boston Marine Transport Inc barge due to a leak from its cargo tank, it said.

Boston Marine Transport said fuel was being transferred from one barge to another when oil could be seen seeping into the water between them, the Coast Guard said. The first barge had the leak, it said.

The Coast Guard said the fuel was leaking into Kill Van Kull, a waterway between Staten Island and New Jersey that connects to New York Bay and the Hudson River.