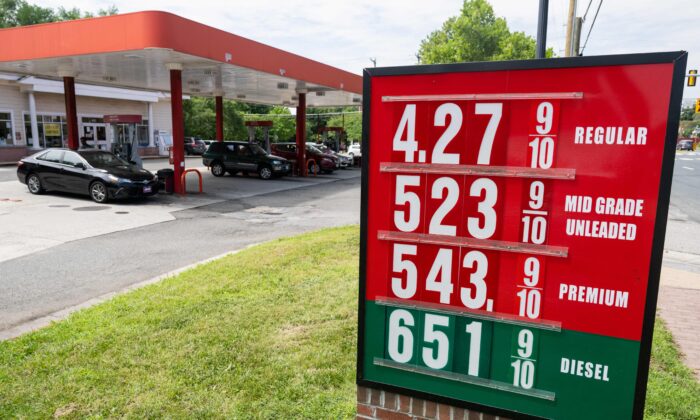 The head of the largest oil and natural gas trade association warned that failure to replenish the U.S. Strategic Petroleum Reserve (SPR) could trigger another oil crisis in the coming weeks.

“The Strategic Petroleum Reserve, unfortunately, has become the strategic political reserve. And we have grave concerns about how it has been so politicized. This is for emergency purposes, not to lower gasoline prices during a time during a political season,” American Petroleum Institute CEO Mike Sommers said in a Friday interview on Fox News.

Sommers added that “I think doing this willy-nilly and doing it in a way that that doesn’t make sense for the market we’re in, we could be dealing with another major oil crisis here in the next few weeks.” Sommers did not elaborate.

Starting earlier this year, the Biden administration has been releasing oil from the SPR in the midst of historically high gas prices. After tens of millions of barrels of oil were released, as of Nov. 25, it’s down to 389.1 million barrels—the lowest amount in decades.

“We’re also real concerned, Maria, about how low it has gone. Lowest level since 1984, not necessarily because of market conditions, but because of political concerns,” Sommers told the news outlet Friday, adding that the federal government needs to start replenishing the SPR in the near future.

“The best plan, in my view, is for us not to continue to use it in a way that is for political purposes and rather do it in a market-based way. And if there is an emergency, that’s what this is for. And the real concern is that 1984, when it was at the levels that we’re in currently, we were using 20 percent less oil,” Sommers said.

President Joe Biden and other White House officials have denied the SPR is being used for political purposes, instead blaming the release and relatively high gas prices on the Ukraine–Russia conflict. Earlier this week, White House spokesman John Kirby told reporters that the federal government has issued about 9,000 permits for drilling on federal lands.

Sommers disputed Kirby’s recent statement by saying that “they make it seem like as soon as you get a lease that you can start drilling on that property,” adding that companies “have to do a lot of prep work before you actually produce on those federal leases, including getting multiple permits.”

In October, after Biden released another 180 million barrels, the White House indicated it would start refilling the SPR once the price of crude oil drops to around $70 per barrel. Earlier this week, U.S. energy security advisor Amos Hochstein told Bloomberg News the White House would consider replenishing the SPR once oil prices are “consistently” around $70, although he didn’t say for how long.

Other than Sommers, Chevron CEO Mike Wirth said Thursday during a New York event that the plan to refill at $70 per barrel is “not necessarily a wise move.” He added that “durable and meaningful permitting reform” would be a “huge step forward.”

As of Friday, automotive group AAA says the average price for a gallon of regular gasoline stands at $3.44. That’s down about 30 cents from one month ago, and it’s slightly higher than the average price exactly one year ago.

Republicans and oil industry officials have said that Biden’s move to release oil from the SPR was designed to keep gas prices artificially low ahead of the Nov. 8 midterm elections. But they have argued that the long-term effects of the order may be devastating.

Earlier this month, the White House asked Congress for $500 million to modernize the SPR, according to a document. If approved by Congress, the request, issued by the White House on Nov. 15, provides the Department of Energy with funding to improve the four SPR sites along the Texas and Louisiana coasts.

The SPR oil is stored in hollowed-out, underground salt caverns that can shift and potentially require maintenance when petroleum is removed and replaced. The facility’s steel pumps and equipment are also subject to constant lashing of moist, salty air, which can be corrosive.

The proposed funding “would allow the SPR to both maintain operational readiness levels and also alleviate anticipated shortfalls due to supply chain issues, the COVID-19 pandemic, and related schedule delays,” the White House said in the request.

Reuters contributed to this report.