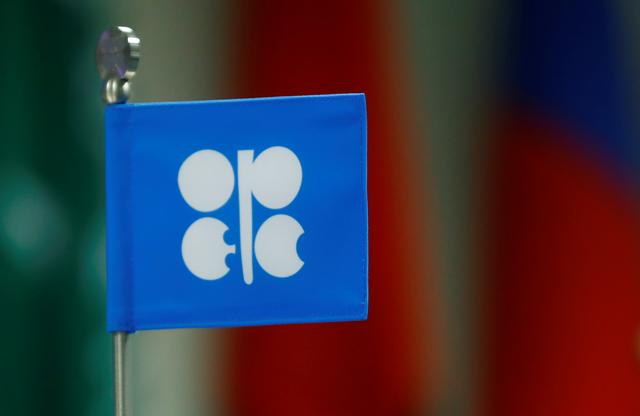 FILE PHOTO: A flag with the Organization of the Petroleum Exporting Countries (OPEC) logo is seen during a meeting of OPEC and non-OPEC producing countries in Vienna, Austria September 22, 2017. REUTERS/Leonhard Foeger

LONDON (Reuters) - The Organization of the Petroleum Exporting Countries and Russia are considering deeper oil output cuts early next year to try to strengthen the oil market, one OPEC source and one source familiar with Russian thinking said on Tuesday.

OPEC and allied producers, led by Russia, together known as OPEC+, are scheduled to reduce output cuts of 7.7 million barrels per day (bpd) by around 2 million bpd from January.

But the impact on energy demand of movement restrictions from the second wave of the COVID-19 pandemic is forcing a rethink.

“It looks like we will have to cut deeper in Q1,” the source familiar with Russian thinking said, speaking on condition of anonymity.

Producers are “exploring many options beside a rollover (of existing cuts),” the OPEC source said.

But the source said a deeper cut would be a “hard call,” as it would hand more market share to producers outside OPEC+.

Algerian Energy Minister Abdelmadjid Attar said keeping current cuts into the first half of 2021 could be considered at the next OPEC+ meetings, according to state news agency APS.

The second wave of COVID-19 meant the oil market faced a “very dangerous” situation, he said.

While Russia is the biggest of the non-OPEC allies, Saudi Arabia, the biggest OPEC producer, said at a meeting last month no-one should doubt the group’s commitment to providing support for the market.

“We will not dodge our responsibilities in this regard,” Saudi Energy Minister Prince Abdulaziz bin Salman said.

“We believe that additional supply from OPEC+ may not be needed just yet and the alliance might choose to delay the ... tapering decision by a quarter,” JP Morgan said last week.