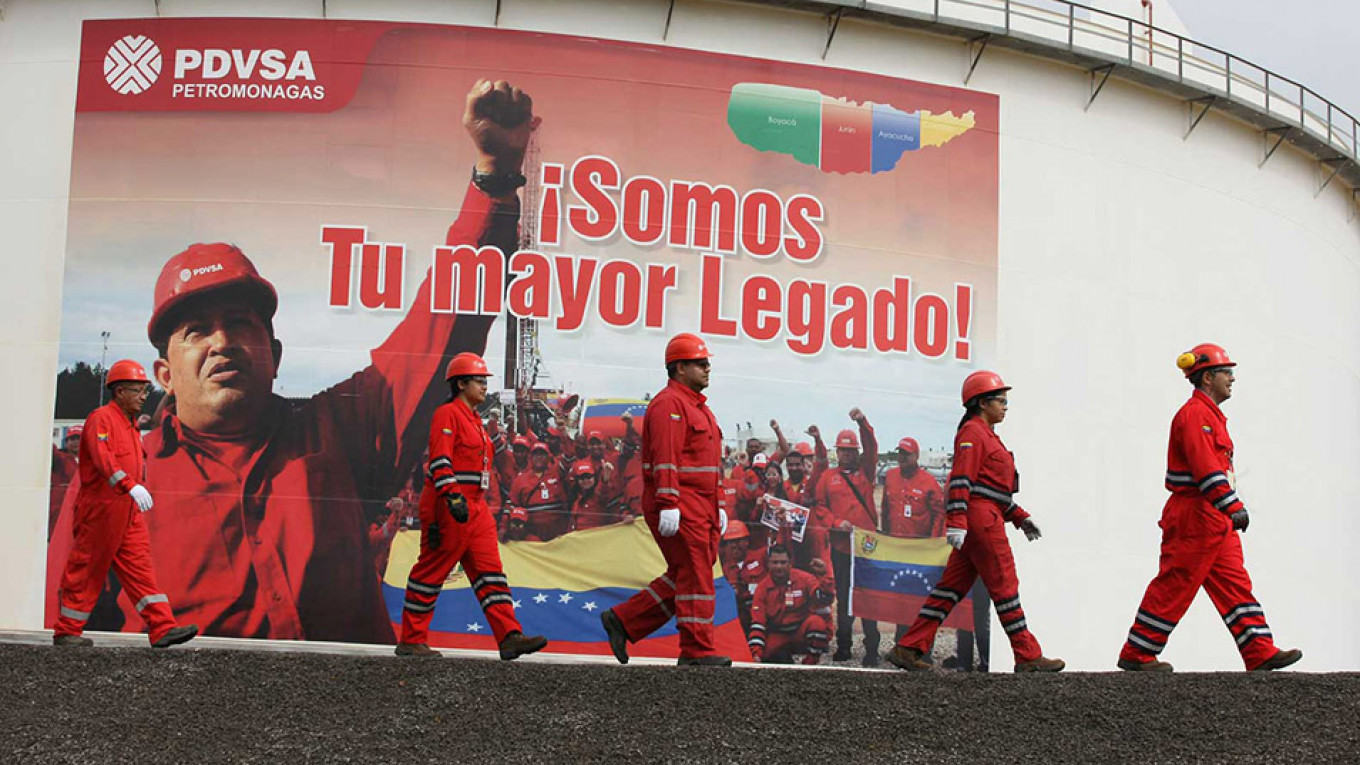 
CARACAS (Reuters) - Officials from Venezuelan state oil company Petroleos de Venezuela [PDVSA.UL] have spoken with private contractors about paying for work fixing the country’s refineries with fuel and byproducts, a half dozen people familiar with the talks said.

The possibility of in-kind compensation comes as U.S. sanctions on PDVSA and severe cash-flow problems at the company have complicated its ability to pay third-party contractors, whose help it needs to revamp gasoline output at its 1.3 million barrel-per-day refining network, which is mostly halted.

The outages have contributed to widespread fuel shortages in recent months, which President Nicolas Maduro’s government temporarily alleviated by importing gasoline from ally Iran.
But the shortages have made it hard for farmers to harvest their crops and for doctors to get to hospitals.

“We want to attend to a humanitarian issue, because there are many people suffering,” said one of the people, who spoke on condition of anonymity because the talks were not yet public.

PDVSA has racked up sizable debts to contractors due to failure to make promised payments for work on oilfields and to infrastructure, which has led to the suspension of many projects and left many private contractors struggling with a lack of cash flow. The company has not recently published figures on its total debts to contractors.

The person said the private companies involved planned to discuss the plan with the U.S. Treasury Department’s Office of Foreign Assets Control (OFAC), which enforces sanctions, to try to obtain a license permitting the activities despite the broad sanctions on PDVSA.

The U.S. Treasury Department declined to comment. Neither PDVSA nor Venezuela’s oil ministry responded to requests for comment.

Payment in fuel could pave the way for those private contractors to export the products themselves. That could boost Venezuela’s oil exports by cutting sanctioned PDVSA out of the process, a bet that customers and shippers would be willing to interact with non-sanctioned private companies.

To be sure, that part of the plan likely would not hold up without an OFAC license. The Trump administration has sanctioned several oil and shipping companies for dealing with Venezuela in recent months to ratchet up efforts to oust Maduro, a socialist who has overseen an economic collapse and stands accused of corruption and human rights violations.

It is also weighing sanctions on a Venezuelan shipping magnate who coordinated a gasoline shipment to the country in April, which he described as “humanitarian work.”

Maduro blames the U.S. sanctions for the fuel shortages and the once-prosperous OPEC nation’s economic woes. Washington has pressured PDVSA’s remaining customers not to send gasoline to the country in exchange for crude, a practice known as a swap that Venezuela had long used to supply the internal market.

The company has recently restarted the catalytic cracker at its 310,000 barrel-per-day (bpd) Cardon

The sanctions have hindered PDVSA’s ability to pay contractors through bank transfers. In-kind payments are not the first method the company has come up with to overcome this obstacle: last year, it paid suppliers and contractors with euros in cash.

But cash has dried up as crude output continues to fall. Venezuela produced just 411,000 barrels per day on June 15 and an average of 421,000 in the first two weeks of June, according to an oil ministry document seen by Reuters. That was down from 573,000 in May, according to figures the country provided to OPEC.

The people said the products PDVSA could pay the contractors include fuel oil, jet fuel and petcoke - a byproduct of the refining process.

Reporting by Deisy Buitrago in Caracas and Luc Cohen in New York; Editing by Daniel Flynn and Jonathan Oatis
Posted by Crude Oil Daily at 2:35 PM