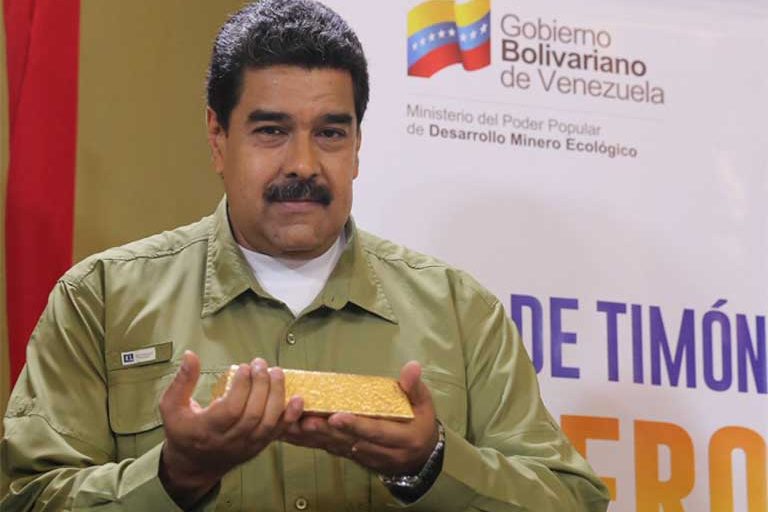 Venezuelan President Nicolás Maduro hefts a bar of gold purportedly dug and processed in the Arco Minero, though experts have their doubts. Photo found at twitter Prensa Presidencial @PresidencialVen


CARACAS (Reuters) - Abu Dhabi investment firm Noor Capital said on Friday that it bought 3 tonnes of gold on Jan. 21 from Venezuela’s central bank, at a time when President Nicolas Maduro is seeking to keep his crisis-stricken government solvent.

Noor Capital said in a statement it would refrain from further transactions until Venezuela’s situation stabilizes and its purchase was in accordance with “international standards and laws in place” as of Jan. 21.

Reuters reported on Thursday that Venezuela had shipped 3 tonnes of gold to the United Arab Emirates on Jan. 26 and would sell 15 tonnes more to the country in the coming days.

Venezuela’s plan was to sell 29 tonnes of gold held in Caracas to the UAE by February in order to provide liquidity for imports of basic goods, a senior official said.

Two high-level Venezuelan central bank officials were made to resign on Thursday and Friday because they did not want to authorize the sale of gold, three sources familiar with the situation said, declining to be named because the situation was sensitive.

The bank did not immediately respond to a request to comment.

The United States, which is backing an attempt by the opposition to oust Maduro and call new elections, warned bankers and traders on Wednesday not to deal in Venezuelan gold.

Venezuela's Guaido says police visited his home
U.S. Republican Senator Marco Rubio tweeted on Thursday that a “French national” working for Noor Capital was in Caracas “to arrange the theft of more Gold from #venezuela.”

Maduro’s government resorted to selling off gold about a year ago after falling oil production, economic collapse and mounting U.S. sanctions hit public income and made it hard for the country to access credit.

The sale of large volumes of the reserves underpinning the currency is an escalation that countries only generally resort to in the most dire financial straits.

Venezuela had gold reserves of 132 tonnes between the central bank’s vaults and the Bank of England at the end of November, according to central bank data.
Posted by Crude Oil Daily at 12:26 PM