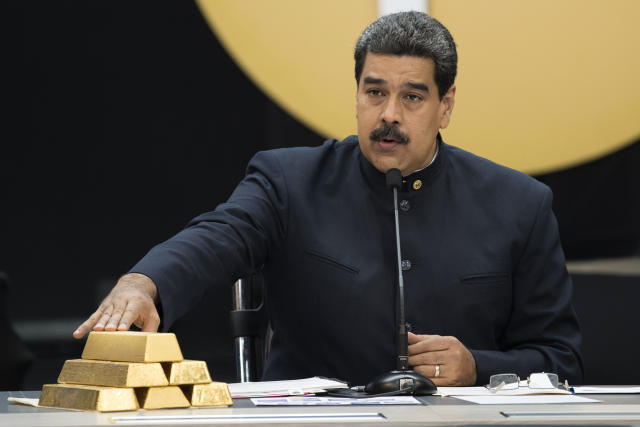 (Bloomberg) -- With 20 tons of gold stacked up for loading and shipping out of Venezuelan vaults, the mystery surrounding them -- and the saber-rattling they’re sparking -- is intensifying.

The Russian airplane that a Venezuelan lawmaker alleged was in Caracas to spirit the gold away left the country without it. But now a cargo plane has landed from Dubai, triggering a new wave of speculation that the gold is headed there instead.

As Nicolas Maduro, the authoritarian ruler, tries to stave off mounting international pressure to relinquish power, the fate of those gold bars has become a cause of great concern both in Venezuela and abroad. Valued at about $850 million, they are an important source of wealth in a country that has plunged into extreme poverty under Maduro’s leadership.

On Thursday, Marco Rubio, the Florida senator who has helped spearhead the U.S.’s hard-line stance toward the Maduro regime, fired off a tweet calling out the United Arab Emirates’ Noor Capital as the financial firm orchestrating the gold transaction with Venezuelan authorities. Rubio went on to warn the firm that both it and any airline it hires to take the gold away will be subject to U.S. Treasury sanctions.

As of late Thursday, the 20 tons had yet to leave the central bank, according to a person with direct knowledge of the matter. They had, though, been weighed and separated for shipment, the person said. He did not know where the gold might be heading or the nature of the transaction. The cargo plane was still at the airport in Caracas, according to the website Flightradar24.

Rubio’s warning came a day after National Security Adviser John Bolton sent a similar message to the investing community. “My advice to bankers, brokers, traders, facilitators, and other businesses: don’t deal in gold, oil, or other Venezuelan commodities being stolen from the Venezuelan people by the Maduro mafia,’’ Bolton said in a tweet.

Twenty tons is a lot of gold bars -- almost 1,600 of them. Together, they represent about 10 percent of all the Venezuelan central bank’s foreign reserves. Those assets form a key part of the fierce battle for control of Venezuela’s finances between Maduro and Juan Guaido, the National Assembly leader who is trying to install a transitional government with the support of the U.S. and other countries across the region.

In interviews and press conferences, Guaido stresses again and again his team’s push to safeguard Venezuela’s few remaining assets so that they can be used to fund the flow of humanitarian aid into the crisis-torn country. He told the Associated Press on Thursday that he planned to defy a government ban on accepting the aid by sending large convoys of medicine into the country with the help of neighboring countries.

Guaido said in the interview that the operation would be a “new test” of the military’s loyalty toward the government. “In a few weeks, they will have to choose if they let much needed aid into the country -- or if they side with Nicolas Maduro,” he said.

The assembly leader has scored key victories in recent days. The Trump administration imposed fresh sanctions on the national oil company PDVSA, effectively blocking Maduro from exporting crude to the U.S., and granted Guaido control of Venezuelan assets at the Federal Reserve Bank of New York.
The U.S. Treasury extended the reach of sanctions to prohibit PDVSA and its customers from using the U.S. financial system by late April, according to measures posted on its website. Americans who work for non-U.S. companies must stop doing any business with PDVSA by March 29.

Last week, the Bank of England denied Maduro officials’ request to withdraw $1.2 billion of gold stored there after top U.S. officials, including Bolton and Secretary of State Michael Pompeo, lobbied their U.K. counterparts to cut off the regime from its overseas holdings.

“The English stole the gold in the Bank of England,” Diosdado Cabello, the powerful No. 2 in Maduro’s socialist party, said in a speech broadcast on state television this week. “The imperialist bosses should know that we will never give up.”

(Updates with Treasury guidelines on sanctions in 12th paragraph.)

--With assistance from Saleha Mohsin, Ben Foldy and Nathan Crooks.

To contact the reporter on this story: Patricia Laya in Caracas at playa2@bloomberg.net

To contact the editors responsible for this story: David Papadopoulos at papadopoulos@bloomberg.net, Anne Reifenberg