Trump just sealed the landmark trade deal with Mexico and Canada, but there's still a long road toward victory 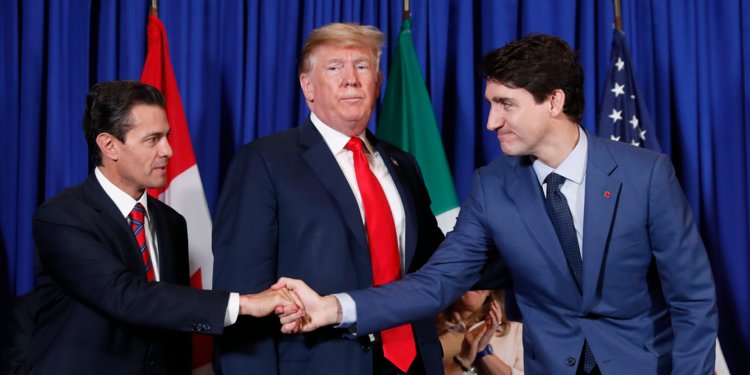 https://www.businessinsider.com/g20-summit-trump-signs-usmca-nafta-update-mexico-canada-2018-11
The leaders of Mexico, Canada, and the US came together Friday in Buenos Aires, Argentina, to officially sign their updated free-trade agreement, known as the US-Mexico-Canada Agreement.

The signing comes just days before Peña Nieto is set to leave office, handing off the presidency to Andrés Manuel López Obrador. It also caps nearly two years of uncertainty over the update to the North American Free Trade Agreement.

"We worked hard on this agreement," Trump said. "It's been long and hard. We've taken a lot of barbs and a little abuse and we got there. It's great for all of our countries."

But while the ceremonial pomp and circumstance is out of the way, the agreement still has a long way to go before it takes full effect. The deal still has to be approved by each country's legislature — and in the US, there are still questions about whether the USMCA can pass Congress.

A long road for some NAFTA tweaks

The USMCA process kicked off just a few days after Trump took office in 2017, when he signed an executive order. Formal negotiations took months to begin, finally starting this year after Trump was able to get key trade negotiators confirmed.

The negotiations were at times tense, with disagreements over various aspects of the deal and personality clashes among the countries' top negotiators.
The pressure of Peña Nieto's departure from office pushed the US and Mexico to agree to a bilateral deal in August to ensure the signing happened before Obrador took office. A deal between the US and Canada followed at the tail end of September, but not before a series of threats from Trump and tense moments when it seemed the trilateral deal might fall through.

Read more: The US, Canada, and Mexico's new trade pact looks a lot like NAFTA. Here are the key differences between them

Ultimately, the USMCA retained a substantial amount of NAFTA's framework, with notable tweaks on the treatment of automobiles, agricultural products, and labor protections.

Still a long way to go

In the US, the USMCA must be reviewed and approved by Congress before taking effect.

Since Trump negotiated the deal under Trade Promotion Authority, the agreement needs only a majority vote in each chamber of Congress and can't be filibustered in the Senate.

But passage could be complicated by a few factors, notably including Democrats' pending majority in the House. Congress must write legislation to pass any trade deal, and there is wide latitude for the Democrats to try to adjust the USMCA to enforce their goals, such as labor regulations and environmental protections.
"Thankfully, the Congress has a role in crafting 'implementing legislation' to make sure the deal benefits and protects middle-class families and working people and isn't simply a rebranding of the same old policies that hurt our economy and workers for years," Senate Minority Leader Chuck Schumer said.

Read more: Here's a look at exactly how the USMCA will weave through Congress

Republicans, generally supportive of free trade, have not been particularly enthusiastic about the deal.
The outgoing House Ways and Means Committee chairman, Kevin Brady, released a statement following the signing that hedged his support for the deal, saying there needed to be careful examination of the deal to ensure that US goods still kept access to the North American markets.

Additionally, a group of 40 Republican House members raised concerns about the new deal's language protecting LGBTQ workers. The group argues that the trade deal will ultimately force the US to adapt workplace protections for transgender people.

"A trade agreement is no place for the adoption of social policy," the group said in a letter to Trump sent November 18.

But Trump seemed confident at the ceremony in Argentina and predicted an easy road through Congress.

"It's been so well reviewed I don't expect to have very much of a problem," he said.
Posted by Crude Oil Daily at 11:53 AM