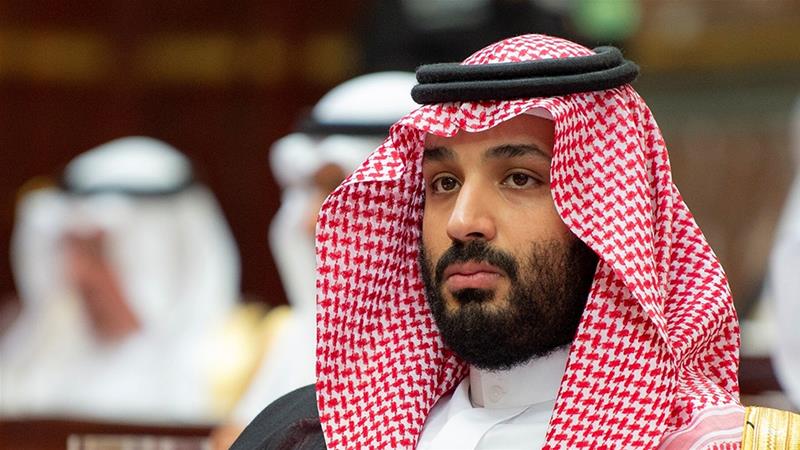 Amid outcry over writer's killing, dozens of princes and cousins want to see change in line of succession, report says.

Senior US officials, meanwhile, have indicated to Saudi advisers in recent weeks they would support Prince Ahmed bin Abdulaziz - who was deputy interior minister for nearly 40 years - as a potential successor to King Salman, according to Saudi sources with direct knowledge of the consultations.

Amid international outrage over Khashoggi's murder, dozens of princes and cousins from powerful branches of the Al Saud family want to see a change in the line of succession, but will not act while King Salman - the crown prince's 82-year-old father - is still alive, sources said.

They recognise the king is unlikely to turn against his favourite son, the report added.

Rather, they are discussing the possibility with other family members that after the king's death, Prince Ahmed, 76, uncle of the crown prince, could take the throne, according to the sources.

Prince Ahmed, King Salman's only surviving full brother, would have the support of family members, the security apparatus, and some Western powers, one of the Saudi sources said.

Prince Ahmed returned to Riyadh in October after two months abroad.
During the trip, he appeared to criticise the Saudi leadership while responding to protesters outside a London residence chanting for the downfall of the Al Saud dynasty. He was one of only three people on the Allegiance Council, made up of the ruling family's senior members, who opposed MBS becoming crown prince in 2017, Saudi sources said at the time.

Neither Prince Ahmed nor his representatives could be reached for comment. Officials in Riyadh did not immediately respond to requests from Reuters for comment on succession issues.

The House of Saud is made up of hundreds of princes. Unlike typical European monarchies, there is no automatic succession from father to eldest son. Instead, the kingdom's tribal traditions dictate the king and senior family members from each branch select the heir they consider fittest to lead.

Saudi sources said they were confident Prince Ahmed would not change or reverse any of the social or economic reforms enacted by the crown prince, would honour existing military procurement contracts, and would restore the unity of the family.

However, one senior US official said the White House is in no hurry to distance itself from MBS despite pressure from legislators and the CIA's assessment he ordered Khashoggi's murder, though that could change once Trump gets a definitive report on the killing from the intelligence community.
The official also said the White House saw it as noteworthy that King Salman seemed to stand by his son - also known as MBS - in a speech in Riyadh on Monday and made no direct reference to Khashoggi's killing, except to praise the Saudi public prosecutor.

The Saudi sources said US officials had cooled on MBS not only because of his suspected role in the murder of Khashoggi. They are also unhappy because the crown prince recently urged the Saudi defence ministry to explore alternative weapons supplies from Russia, the sources said.

In a letter dated May 15, seen by Reuters, the crown prince requested the defence ministry "focus on purchasing weapon systems and equipment in the most pressing fields" and get training on them, including the Russian S-400 surface-to-air missile system.

Neither the Russian defence ministry nor officials in Riyadh immediately responded to requests for comment.

The brutal killing of Khashoggi, a prominent critic of the crown prince, in the Saudi consulate in Istanbul last month has drawn global condemnation, including from many politicians and officials in the United States, a key Saudi ally.

Saudi Arabia's foreign minister said on Tuesday claims, including by the CIA, that MBS gave the order to kill Khashoggi were false, according to an Arabic-language newspaper interview.

"We in the kingdom know that such allegations about the crown prince have no basis in truth and we categorically reject them, whether through leaks or not," Foreign Minister Adel al-Jubeir was quoted as saying in Saudi-owned al-Sharq al-Awsat newspaper.

"They are leaks that have not been officially announced, and I have noticed that they are based on an assessment, not conclusive evidence."

Jubeir was also asked about comments by Turkish President Recep Tayyip Erdogan that the kill order came from the highest level of the Saudi leadership but probably not King Salman, which has put the spotlight instead on the 33-year-old crown prince.

"We have already asked the Turkish authorities at the highest level about the meaning of these comments, and they confirmed to us categorically that the crown prince is not meant by these comments," he said.

"The leadership of the kingdom of Saudi Arabia - represented by the Custodian of the Two Holy Mosques [the king] and the crown prince - is a red line and we will not permit attempts to harm or undermine them."

Since his ascension, MBS has gained popular support with high-profile social and economic reforms, including ending a ban on women driving and opening cinemas in the conservative kingdom.

However, the reforms have been accompanied by a crackdown on dissent, a purge of top royals and businessmen on corruption charges, and a costly war in Yemen.

He has also marginalised senior members of the royal family and consolidated control over Saudi's security and intelligence agencies. The entire House of Saud has emerged weakened as a result.

According to one well-placed Saudi source, many princes from senior circles in the family believe a change in the line of succession "would not provoke any resistance from the security or intelligence bodies he controls" because of their loyalty to the wider family.

"They [the security apparatus] will follow any consensus reached by the family."

Officials in Riyadh did not respond to a request for comment.
Posted by Crude Oil Daily at 12:14 PM