Dow Jones has record-setting day while TSX climbs, led by oil and gas 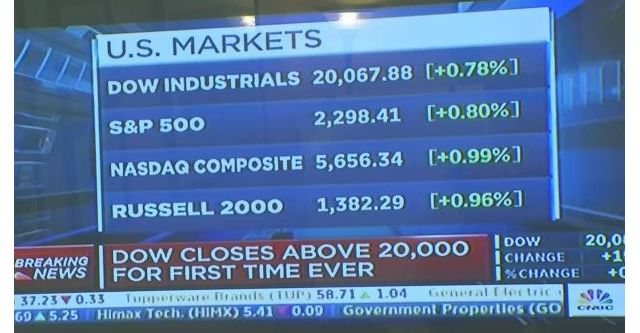 
Canada’s main stock index advanced Wednesday, led primarily by gains from oil and gas producers as the price of crude edged back closer to the US$50 mark.

The September crude oil contract rose 43 cents to settle at US$49.59 per barrel, after breaching US$50 on Monday for the first time in about two months.

“We’re seeing short-term optimism in terms of oil prices, which is refreshing to see given that the overlying theme this year has been weakness in oil prices after the rebound we saw in 2016,” said Kash Pashootan, a senior vice-president and portfolio manager at First Avenue Advisory, a Raymond James company in Toronto.

Still, Pashootan said he doesn’t feel the supply and demand fundamentals have changed enough where prices would rise to $55 U.S. to $60 U.S., at least not any time soon.

“We don’t feel that from a foundational point of view that the story with oil has changed.”


In New York, the Dow Jones industrial average crossed the record-setting 22,000 mark on Wednesday, advancing 52.32 points to settle at 22,016.24, after flirting with the number for the past few days. The index had been off the strong earnings reports major companies had been reporting the past few weeks and crossed the threshold thanks to Apple’s stock, which surged after greatly exceeding quarterly expectations on Tuesday.

In currency markets, the Canadian dollar was trading at an average price of 79.62 cents U.S., down 0.29 of a cent.

Elsewhere in commodities, the September natural gas contract gave back a cent at $2.81 per mmBTU, December gold was down one dollar to $1,278.40 an ounce and September copper was unchanged at $2.88 a pound.
Posted by Crude Oil Daily at 12:35 PM