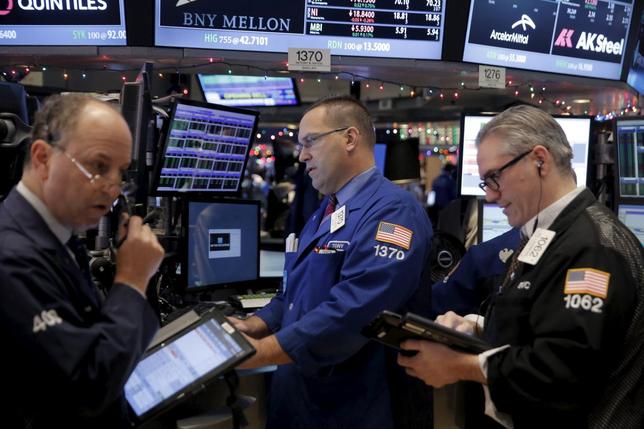 Traders work on the floor of the New York Stock Exchange (NYSE) in New York, December 22, 2015.
Reuters/Lucas Jackson
Wall Street began the last trading week of the year in the red, dragged down by energy stocks, as oil prices resumed a slide brought on by a global oversupply.
All 10 major S&P 500 sectors were lower, led by the 0.63 percent fall in the energy sector. Exxon's shares were down 1.7 percent at $77.99, while Chevron was down 2.1 percent at $90.12. The stocks were among the biggest drags on the S&P 500 and the Dow.
"The 3 percent dive in crude oil this morning shows you that the sellers are still in control of the energy market and that's leading jitters on Wall Street, coupled with just normal digestive action after last week's strong gains," said Adam Sarhan, chief executive of Sarhan Capital in New York.
All three major indexes posted their best weeks since mid-November last week, rising about 2.5 percent, led by a short-lived surge in energy stocks.
The S&P 500 slipped back into negative territory for the year on Monday, while the Dow was down 1.96 percent. The Nasdaq Composite was up 6.19 percent.
At 9:39 a.m. ET (1439 GMT), the Dow Jones industrial average was down 85.98 points, or 0.49 percent, at 17,466.19, the S&P 500 was down 9.93 points, or 0.48 percent, at 2,051.06 and the Nasdaq Composite index was down 20.08 points, or 0.4 percent, at 5,028.42.
Trading volumes are expected be subdued through the week.
Global stocks ticked lower on Monday over fresh worries about Chinese growth after data showed profits at industrial companies in the world's second-largest economy fell in November for the sixth month in a row.
Valeant was down 4.9 percent at $108.57 after the Canadian drugmaker said Chief Executive Michael Pearson is going on medical leave.
Fitbit was up 4 percent at $30, after reports that the wearable gadget maker's iOS app was the most downloaded after Christmas, suggesting strong holiday demand.
Disney was up 1.1 percent at $107.02, the only Dow component posting gains, after the company's latest Star Wars installment topped $1 billion in ticket sales.
Declining issues outnumbered advancing ones on the NYSE by 2,204 to 533. On the Nasdaq, 1,642 issues fell and 719 advanced.
The S&P 500 index showed no new 52-week highs and no new lows, while the Nasdaq recorded eight new highs and 13 new lows.
(Reporting by Abhiram Nandakumar in Bengaluru; Editing by Don Sebastian)