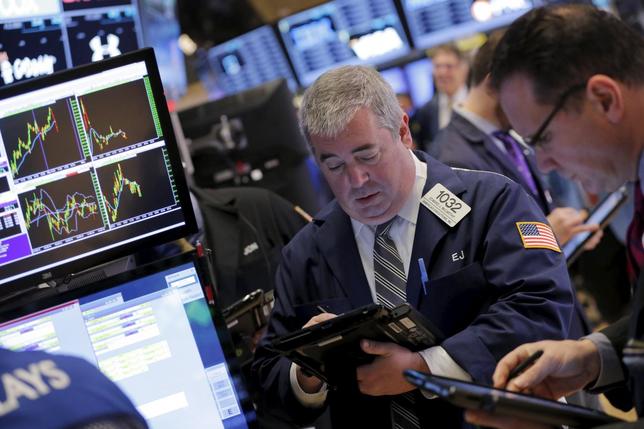 Traders work on the floor of the New York Stock Exchange in New York, December 28, 2015.

U.S. stock indexes were higher on Tuesday, with the S&P 500 logging a small gain for the year, as tech stocks rallied and energy stocks reflected a recovery in crude prices.

The S&P 500 was up 0.8 percent for the year, while the Nasdaq Composite extended gains and was up 7.59 percent. The Dow Jones industrial average, however, was down about 0.66 percent.

"Investors on average are at the crossroads of concern and optimism," he said. Lower oil prices put the pace of global growth in question and could translate to lackluster earnings, he added.

Crude prices edged up as colder weather entered Europe and North America, raising hopes of a short-term uptick in the tepid demand that has plagued the commodity this year.

All 10 major S&P sectors were higher, led by a 1.16 percent rise in the tech sector.

Data on Tuesday indicated higher consumer sentiment, with the Conference Board's index of consumer confidence for December rising to 96.5, above the 93.8 expected.

Still, the slide in oil prices appear to have dashed hopes of a strong year-end rally, traditionally known as the Santa Claus rally.

Trading volumes are expected to remain thin this week as the year winds down.

Pep Boys was up 8 percent at $18.80 after the auto parts retailer's board found Carl Icahn's latest offer superior to the deal it accepted from Japan's Bridgestone.

(Reporting by Abhiram Nandakumar in Bengaluru; Editing by Don Sebastian)